Guardians of the Galaxy review
626 Views
5 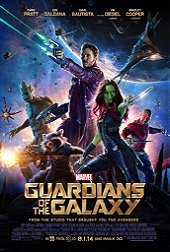 Wow! That’s what you can call a fun movie. I have to be honest, when I heard that Marvel was planning to release 2 or 3 super-hero flicks every year for the coming decade, I was pretty sure that they would saturate the market and end up with some major flops but if they keep reinventing themselves like that, it might take longer then I thought before they mess up, in fact, it might never happen at all after all. Indeed, this movie actually had basically the same usual ingredients but they managed to give it just the right flavour to make it really tasty. First of all, it is a gorgeous SF feature, one of the most interesting futuristic worlds I have seen for a while, full of neat details. Then, you had those awesome hilarious characters far more entertaining than your usual powerful and righteous super beings. The nice thing is that, in contrary to the Avengers, those characters were completely new and rather unknown (at least, to me) so the potential is huge to develop their background and history in the next sequels. This potential is pushed even further since it is taking place in outer space so their future adventure can be set in some wild and strange worlds without the constraints of our planet. So, I really enjoyed it, it is one of the best super-hero flicks out there, even the best movie produced by Marvel so far, and I will definitely check the sequel when it’s coming out.