Dawn of the Planet of the Apes review
252 Views
0

Superb sequel with the best CGI effects ever. 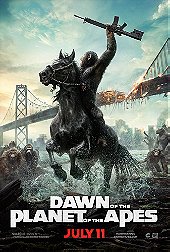 Although the original installment released in 1968 remains a classic, Planet Of The Apes as a franchise has been mixed due to its mediocre sequels and the 2001 remake. Those films portrayed an ape-dominated world as more like science-fiction adventures than displaying humans and apes as a family with a joint ancestral history. This is where Rise Of The Planet Of The Apes succeeded because it captured the heart and more realistic tone, including the visual effects, of humanity’s resemblance to apes. It also had a more original touch to it as Hollywood filmed it from more a scientific angle with more depth. Thankfully, its sequel Dawn Of The Planet Of The Apes is a triumph and it could be one of the few follow-ups these days to have outshined the predecessor. The reason for Dawn’s superiority above Rise is due to the story examining further between what constitutes being human and being ape through themes as well as enhancing character study. Still, Dawn continues this tremendous rebooted franchise with more drama and adventure than before.


The majority of mainstream Hollywood films are about the computer-generated effects. They have been utilized to enhance the visual cinematic experience through genres of either especially action or fantasy/science-fiction, but rarely do we see effects primarily centred for drama. Although we got action scenes in Dawn Of The Planet Of The Apes, the film’s CGI and motion-capture is arguably the greatest and most realistic ever produced onto the screen. Only the art of performance capture could have worked when performing as apes because the film’s message compares and contrasts their connection with humanity. The fact we do not see the actors as these apes on-screen illustrates how they differ themselves from humans yet at the same time, the performer’s actions establish that connection further. In terms of the actual effects, the attention to detail was unbelievable which on occasions appeared as clear as high-definition at a higher frame rate. To illustrate this, director Matt Reeves numerously used close-ups and extreme close-ups. These shots become effective in showing character development and the significance became vital when expressing them. Still, if there is a film to show you how CGI is done properly, Dawn Of The Planet Of The Apes will fill you in.


The film is set ten years after the events of Rise Of The Planet Of The Apes and besides the leading ape Caesar, wonderfully portrayed via motion-capture by Andy Serkis, we see a new ensemble cast. In place of James Franco, Jason Clarke portrays Malcolm who is a genuine family man and the leader of a small group of humans within ape territory. Clarke’s character is roughly the same as Franco’s in Rise but his relationship with Caesar is heartfelt and engaging. Keri Russell and Kodi-Smit McPhee portray Malcolm’s girlfriend and young son. This is where Dawn, to a degree, resembles itself to Jurassic Park - a small group with a family wandering into a whole new wilderness on Earth. Gary Oldman has been an actor of many talents and portrayed a number of heroes and villains throughout his career, but his role as Dreyfus is an interesting one because he is, in fact, neither of them. He hates the apes for making him lose his family and he wants what’s best for his species, like Caesar does, but he comes across as a villain. So, Oldman’s performance was solid, too. However, the obvious stand-out performer is Andy Serkis who absolutely masterfully portrayed Caesar through motion-capture, a style of acting that he is best known for. From Gollum to Kong and now to Caesar, Serkis has illustrated that even through CGI, we can experience raw human emotions and it goes to show that acting is not about facial expression and body language is equally important. The rest of the motion-capture performances were by unknown actors and there were certain characters that stood out which include Koba, Blue Eyes, Maurice, Rocket and Ash. Still, Serkis was the right guy to lead the other cast of motion capture roles.


Dawn Of The Planet Of The Apes follows in the footsteps of great sequels that surpass the predecessor. Like Rise, Dawn does not necessarily serve as a direct prequel to the 1968 classic but tells tales of joint domination on Earth between mankind and apes on a more emotional, realistic scale. For perhaps the first time in the franchise, Dawn also constitutes what makes one human and one ape and actually teaches viewers with lessons about how both species are different whilst simultaneously reflecting similarities. Nevertheless, it is a superb sequel that is more engaging, both visually and emotionally, and leaves the viewers with more excitement for a third installment.