A hilariously fun sequel on par with predecessor. 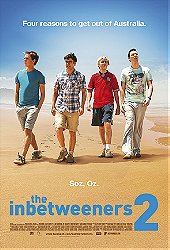 Despite average expectations and uncertainty of living up to the series, The Inbetweeners Movie in 2011 had met with positive reception and it seemed like it would be the end of the road for the four lads. However, The Inbetweeners 2 sees our favourite British youngsters return, probably for their final time, in another of their abroad adventures with sun, sand, sea, booze, sex and women awaiting them. The reason for the series and first film’s success has been due to its connection with its target audience - teenagers within the British culture, whilst simultaneously being full of laughs for adults. The Inbetweeners 2 seemed like a financial project by using its past success as enticement but it proved itself as another success in the series as it delivers exactly what you would expect. It may be slowly suffering from repetition but the humour in The Inbetweeners still has not degraded and becomes a fun sequel and possibly finale.

Due to being made for cinema rather than television, The Inbetweeners 2 was filmed differently in comparison to the series. Like the first film, it has a variety of shots that enhanced creativity within the franchise and to British cinema. The most interesting is Beesley and Morris’ use of montage shots which together create meaning by the fact one follows another. The four lads are out in Australia for the same reason and experience the same adventure but it is from four different perspectives. Co-creators and writers of the show and films, Damon Beesley and Iain Morris replace Ben Palmer as The Inbetweeners 2 director. Both individually and as a pair, Beesley and Morris made their directorial debuts and went off to a solid start by delivering the same moments of laughter that were so great in the series and also expressing something different, filming wise. Their work has now reached its peak and at this rate, it needs no further instalments.

Teenagers, particularly male, are usually structured into certain character types that are different from each other yet inner connections keep them together. Will, Simon, Jay and Neil are all four totally different lads but their mutual resemblances of disaster, unpopularity and behaviour in a social atmosphere makes them more interesting. It actually allows audiences to explore teenagers in this current age at a wider scale. Now, we have seen grown men portray teenagers on numerous occasions, such as American Pie, but the four Inbetweeners exemplify almost exactly how male teenagers behave from 16-19 years old, though some could argue it’s an exaggeration. Simon Bird, James Buckley, Blake Harrison and Joe Thomas all return to their respective roles and once again, deliver great performances without losing character grasp. Bird’s role as Will McKenzie is an exact definition of a teenage geek wanting to become a man but his stubbornness of his surroundings and thoughts draw him back a few steps. Thomas once again delivers as Simon Cooper who is perhaps the most vulnerable of the four which sends him into all sorts of trouble. Blake Harrison shines as Neil Sutherland (this reviewer’s favourite Inbetweener) with a simple-minded performance. In fact, it is usually Neil’s simple yet somewhat awkward attitude which causes many of the controversies surrounding the boys. And last but not least, James Buckley is still impressive as Jay Cartwright, the one inbetweener who seems the most masculine by his constant talks about sexuality and being a lecturer for the others. In one way or another, we can relate characteristics of these lads to teenagers around us and that is why the show and films are so successful. Minus the four leading stars, we see newbies including Emily Berrington and Freddie Stroma as well as those returning such as Tamla Kari, Lydia Rose Bewley, Greg Davies, David Schaal and Belinda Stewart-Wilson.

Judging from how the first film concluded, The Inbetweeners 2 was not entirely necessary. It may have gone down the same repetitive, lazy path as The Hangover films but it really does not do that and adapts the same adventure types into different circumstances. The humour type is still the same and it still manages to please its viewers and maintain its success; however, over time it may become too much and lose its relevance as they just survived with this one. Thus, despite this sequel is another triumph, it may be safe to say that The Inbetweeners 2 should be their last adventure as both a film duology and a TV series.