Film Of The Decade So Far. 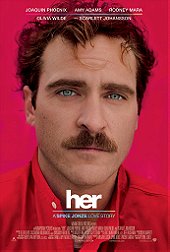 Anyone who has seen past feature films from Spike Jonze, such as Being John Malkovich and Adaptation, will notice that he is an unorthodox filmmaker with an auteurist style of expressing human fundamentals within usually a science-fiction, imaginative world. His latest science-fiction drama Her examines the true emotional, physical constitutions of humanity and it communicates with the audience at an intense rate with emotions flying everywhere. Not in a long time has there been a film with such emotional complexity that it doesn’t constitute a certain mood. Her also beautifully explores humanity’s current connection with technology and creates an argument as to whether it represents the future or is another sci-fi. Nevertheless, Her is a ground-breaker that easily makes it Spike Jonze’s best to date and one of the most wonderful and original films of the decade.


Besides the unorthodox story, Her distances itself from traditional Hollywood seen these days. Spike Jonze’s independent approach to not only his original script but to direction establishes Her as a film of narrative complexity. It is simple to describe the plot – a lonely man becomes romantically involved with his operating system, but on an emotional level, it is a whole lot more complicating and challenges that relationship in a variety of ways. It may seem odd on paper but technology is a vital part of our lives today and Theodore exemplifies that connection, even to go as far as fall in love with it. Jonze’s incredible script sends the audience into a maze of emotions with the bond between human and operating system slotting in moments of warmth, giggles, confusion, guilt and heartbreak. This is due to the complexity of the relationship being that of a normal human relationship yet one of the two is not even human. There’s even a lot of talk about wanting to be human which Jonze brilliantly, especially in the form of Scarlett Johansson, leaves us to imagine Samantha’s physical form for ourselves.


On that note, Her is also a wonderful visual spectacle. The cinematography by Hoyte Van Hoytema is shot in a colourful tone that balances Los Angeles and it being in a science-fiction like world. It is particularly the use of various colours in medium and wide shots that exemplify this and illustrate a certain character’s mood. For example, the film’s recurring use of the colour red symbolises romance and love, which is noticed usually on the computing system, Theodore’s shirt or the filled lighting. Besides the colour red, Van Hoytema and Jonze utilize other glistening colouring within landscape shots and in medium shots that generate this unique world from Theodore’s perspective and to balance it between science-fiction setting and future Los Angeles. Nevertheless, Jonze’s direction and Van Hoytema’s cinematography is spectacular but it is underrated and deserved further recognition at the Oscars.


It has been a very wise and positive decision for Joaquin Phoenix to return to acting. After his memorable performance in The Master, he stars in what is quite possibly his most unique yet emotionally ground-breaking role to date as Theodore Twombly. He is one of those leading characters who have so much about him that he doesn’t know what direction he is heading into. His success as a city writer exemplifies signs of creativity and intelligence yet the contents of his work is about romance and relationships, which in this film is difficult for Theodore to maintain. Phoenix’s performance is an abundance of sentiments and that is difficult to sustain when playing a character. At times, his acting was funny, it was warm, it was difficult to interpret and it was heart-breaking, which is exactly how Jonze wrote and directed this character. Phoenix was unlucky to have not received an Oscar nomination but now that his return to acting is up and running, he may have his chance next time.


Alongside Joaquin Phoenix, we see a variety of female supporting characters who each give solid performances. Scarlett Johansson provides the voice of operating system Samantha. Her role is unique because she is perhaps the most human character in the film yet we only hear her voice and also, out of the other women we see in the film, Samantha could be the most sexually attractive character yet we do not see her on-screen. We only have to picture her for ourselves, hence why one particular sex scene between Samantha and Theodore is shot in complete darkness. Her relationship with Theodore is so strong that she seems to illustrate real human feelings whilst throughout the film, arguing to herself that they could still be operated. The audience become involved in their bond and at times, we seem to forget that she is a computer. So we become part of inside Theodore’s mind, perhaps like Craig and Lotte in Being John Malkovich. Scarlett Johansson has not been so engaging in a role until Samantha in Her and like Phoenix, she should have received an Oscar nomination for her performance and has become influential to the idea that acting is not entirely about figural expressions. Meanwhile, Amy Adams and Rooney Mara make good appearances in the other two women in Theodore’s life, both of whom are human – Catherine (Mara) is his ex-wife and Amy (Adams) as his close friend. Together, this ensemble cast reflect the uniqueness of Jonze’s script and direction to create something extraordinary, heartfelt and thought-provoking.


Her is truly one of a kind. Its unique and simple idea on paper of a human-computer relationship embarks you into a gripping emotional ride for two hours. It convincingly portrays humanity’s relationship with technology and how it affects our minds. In fact, the film is complex in itself with genre as to whether it is a science-fiction story inside someone’s mind or if this could be our future in years to come. That is how a film truly should conclude – to make its audience think and reflect on things, whether in the past, present or future. Her certainly does argue this conspiracy and it still could be possible with technology developing. Nevertheless as a film, Her is a genuine, compelling and emotionally powerful masterpiece that could very well be the greatest of 2013 and a strong contender for the best film of the 2010s.