Review of Sansho the Bailiff 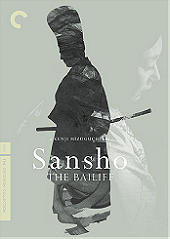 Drawing on a popular traditional tale and a 1915 novella by Mori Ogai, Mizoguchi’s Sansho the Bailiff/Sanshô dayû (1954) is a jidai-geki historical film concerning the cruel misfortune befalling the wife and children of a humane exiled provincial governor in ancient feudal Japan. I don’t want to give away too much, but some comments below should inevitably carry spoilers

Few if any films can match the feeling for the beauty of nature, the mix of painterly eye and captivating silvery luminosity- even accompanied by a sense of sinister foreboding. The great cinematographer Miyagawa Kazuo does a magnificent job. Mizo trusted his cinematographers and presumably his own sense of shot set-up, and what he wanted, without recourse to the viewfinder. He usually tended to give actors/actresses, designers and loyal screenwriter Yoda a very much harder time by all accounts. He was a stickler for historical authenticity. With his preference for long takes, Mizoguchi is renowned for serene fluid camera moves (masterly yet unobtrusive tracking and crane shots are a trademark), but equally he knew when stillness was required. You see that in the central, heart-rending scene i’ll call Anju’s ripples. There’s more impact in her few ripples than a Hollywood tidal wave.

Water features strongly in the film. Mizoguchi was never one to blatantly point up symbolism. He was an undemonstrative master like Renoir (who also deserves more appreciation nowadays) but here it’s involved with separation, beauty, purity, self-sacrifice, danger, aching longing, suffering, continuity, and at the end the eternal. The film certainly takes on a spiritual dimension, going to the wider universe beyond its tale, rather like Ugetsu’s final shot but here at the perfect ending place, the sea. Water is counterpointed by fire in the film, male is balanced with female. It’s been said by one reviewer that some scenes with a large sky- presumably including the mother Tamaki’s plaintive call across the sea, hair blowing across her face in the wind, and the ending- emit a sense of hope.

Sansho the Bailiff was the third consecutive Mizoguchi film to win a major prize at Venice (the Silver Lion, like Ugetsu, whereas The Life of Oharu won the international prize) the same vintage year as Seven Samurai, La Strada and On the Waterfront- all beaten by a now forgotten version of Romeo and Juliet! Mizoguchi was an extremely driven, competitive director. It was the success of Kurosawa’s Rashomon at Venice in 1951 that spurred him on to the heights of his string of late masterpieces. A pity international recognition came so late for him- he died of leukemia in 1956, at the age of 58- but his epitaph, quite rightly, carries the words “the world’s greatest film director.”

I don’t think any film matches Sansho the Bailiff’s sense of the aching pain of family separation, of longing to be reunited. Mizo was often strong on issues of identity. Here we have Zushio’s name being changed more than once, and other repetitions of scenes and motifs: wood being chopped by the children then- a crucial moment- as adults and, providing an ironic sense of justice, Sansho being exiled, just as the governor had been exiled. The film makes striking use of sounds and song, carried and echoing across time and space. With its message that “without mercy man is like a beast”, it’s a film full of compassion and humanity, which balances cruelty and suffering with love.

The film has clear links with Mizo’s own life: the main female characters, sister Anju (Kagawa Kyoko) and mother Tamaki (Tanaka Kinuyo) are paragons like Mizo’s own mother and sister. Mizo’s beloved mother died in his teens and there may be something of his own yearning in Zushio’s search. On the other hand, Mizo thought none too highly of his dad, whereas in the film the father is also a paragon of virtue and wisdom to be guarded and passed on. But then, the tyrant Sansho himself- memorably played by regular Mizoguchi stalwart Shindo Eitaro- may stand for the father Mizo despised as ripe (or rotten) for overthrow. Sansho’s own son rejects his ways and turns to Buddhism.

Mizoguchi aimed very high, and often behaved tyrannically on set but although something of an aesthete his films are not mannered or pretentious. He aimed for balance between realism and heightened emotion, liked to give discreet dignity and distance to emotions without milking effects with simplistic manipulation. Melodrama in his hands can reach a sublime level of refinement. He avoids self-serving diversions that will harm the narrative. There is an underlying integrity to each scene and the film as a whole. He has his own distinct style without fitting so neatly the auteur model as, say, Ozu and Bresson. Perhaps that partly accounts for his relative neglect? In Sansho the Bailiff the average shot length is shorter than the earlier extremes of Story of the Late Chrysanthemums (1939) and Loyal 47 Ronin (1941), which were exceptional for their time, and gone is Mizoguchi’s abhorrence of close-up evident in Straits of Love and Hate (1937): though still used quite sparingly, emotional connection between viewer and characters is stengthened.

Women, and their suffering in an oppressive patriarchal world, are often central in his films. Here the main character may be Zushio and the title character also male, but my feelings go out more for sister Anju. I find the actress Kagawa Kyoko- recently interviewed in Mark Cousins’ The Story of Film- adorable.

The film’s politics support family unity and an idealised patriarchal wisdom- in competition with a brutal version of male power- but these are hardly unique to the Right. Instead Mizo supports the overthrow of tyranny and the revolt by the enslaved and again his sympathies are with the underdogs and dispossessed, even if here the main characters are from more noble lineage than often the case in his films. He was consistently opposed to injustice, as recognised by the leftist Yoda (whose torture by the establishment in the 30s may add relevance to Sansho’s brutal tortures), and in the film gives Sansho a tougher fate than does Mori Ogai, though without resorting to vengeful sadism. Mizo was often authoritarian, petulant, self-centred and even abusive, and for all his concentration on the suffering of women he was very far from saint-like in his own dealings with them. Yet the humane qualities that shine through films like Sansho the Bailiff are clearly genuine. The power of the wonderful ending, often described as transcendental, may also be partly indebted to the Buddhism which Mizo developed late in life. Sansho the Bailiff has been picked by one organisation among the top 100 spiritual films, but the Vatican missed it and Mizo out of their 45 recommendations, i notice.

Mizoguchi and Yoda made several changes to the original sources, for the purposes of greater realism and social message. The siblings’ age seniority is reversed, their young adulthood rather than simply childhood is portrayed and miraculous occurrences of a fairy-tale like story are ditched. The film also provides a reason for the governor’s exile, to reinforce solidarity with the people in the face of unjust authority.

Mizoguchi no doubt rightly jettisoned the miraculous cure of Tamaki’s blindness in Mori Ogai’s novella. Some experience the film as too fraught with harrowing suffering, and consider it pessimistic. For me it finds a poignant balance between suffering and beauty, cruelty and love, imprisonment and freedom, pain and redemption, loss and comfort. His films have aesthetic value but also political anger. The two can be joined, though few directors do so as convincingly.

There’s a useful book on the film by Dudley Andrew and Carole Cavanaugh as part of the BFI classics series. A recent book on Mizoguchi by Mark le Fanu rates Sansho the Bailiff his very best, and praises it accordingly. Robin Wood’s article The Ghost Princess and the Seaweed Gatherer which covers the film (not solely) is excellent. Choosing it to represent 1954 in his book Flickers, Gilbert Adair called it a film for whose sake cinema exists. In the early 1990s Terrence Malick wrote a stage play based on the film, apparently directed in rehearsal by Andzrej Wajda, that failed to come to fruition in the US.

Sansho the Bailiff, the peak of cinema.