Another jerkoff to the LAPD 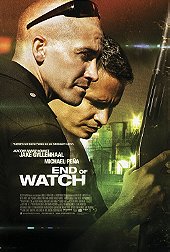 Cliff's Notes
There's not a whole lot to say about this film. The trailers are kind of a lie, as they make it seem like there is actually a plot...but there isn't.

That may sound like hyperbole, but literally, there is no actual plot to the movie. There is no MacGuffin, there is no real storyline, there is no arc...nothing. The supposed plot that the viewer is fed during the trailer is that the two protagonist cops accidentally meddle in high level Mexican cartel business and in turn get marked for assassination.

This sounds good enough to drive a movie, but in this script it is at best a side interest. It does not dominate the "story" and is not even introduced as an element until halfway through the picture.

Instead the entire film acts as little more than a Hollywood-dramatized ride-along, simply following these two cops around as they go on calls. It's basically one long episode of Cops, if the TV show aired private conversations in the squad car between partners and offered a reality show glimpse into their home lives.

Much of the film is even displayed through the now-tired "found footage aesthetic," with diegetic hand-held and otherwise portable cameras providing much of the visuals.

Good stuff
To the filmmaker's credit, the "found footage" gimmick was done probably as well as it could have been. The footage did not dominate the picture and did not really feel forced, despite making up at least half of the visuals, if not more. It did add a bit to the overall experience, giving a more authentic sense to what was going on (an effect which could probably be predicted, given the success of the Cops tv show.)

Also surprisingly, despite having essentially no plot, the film is able to hold the viewer's attention, even if just out of interest in what might happen next. Personally I found myself at least partially interested simply because I was waiting for a plot to pick up.

The acting also helped make up for that slack, as the leads Gyllenhaal and Peña were certainly believable as their characters, and offered a realistic portrayal that felt genuine.

Bad stuff
Ultimately however, the film was still little more than an aimless reality show. It can't even really be called a character study, as, despite getting glimpses of the personal lives of the cops, we never really dive very deep into the characters themselves. The generic point of "cops are people just like you" was made early on, but the viewer is continuously bashed over the head with it right down to the final scene.

Given his past work, it's obvious writer/director David Ayer has an incredible fascination with police and the LAPD in particular, and this film only further cements that.

It functions as little more than yet another adulatory blow job for the boys in blue. This is made unmistakably clear from the opening voice-over monologue in which Gyllenhaal identifies himself as a cop and goes on to self-describe in an almost hagiographic depiction of the profession and anyone in it.

And this really set the tone for the whole film. The movie felt less like a story about particular characters that the viewer is supposed to care about, and more like a propaganda piece for the police profession. There was nothing particularly interesting, extraordinary, memorable, or even significant about the two main characters, despite what seemed like a couple of attempts to portray them as exceptionally heroic by having them receive official praise and recognition from the department.

And while it may be argued that the generic "every-cop" nature of the characters was precisely the point, this simply supports the notion that it's not so much an actual story but rather just a feel-good statement about cops in general.

Needless to say, with no plot, an overused and predictable premise, and simplistic and repetitive character development (we get it, "cops are just regular guys like you and me"), it's no surprise that the film felt a full hour longer than it really was.

Without end credits the run time is barely 100 minutes, but had I not looked, I would have sworn it was closer to 200.

Bottom line
In the end I still found myself giving the film a 6, as despite getting slightly frustrated with the pacing and lack of plot a few times, I still was interested enough to keep watching without feeling the need to fast forward.

If you're into cop movies or even just the TV show Cops, you'll definitely like this film. Otherwise, it's possible you'll be bored and/or uninterested much of the time.