Totally unnecessary that should stay a TV series. 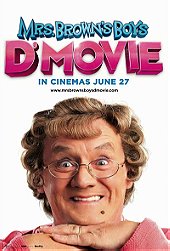 Since series one aired in 2011, the television show of Mrs Brown’s Boys has been heavily panned by critics. This has been due to the general idea of a man dressing as a foul-mouthed elderly Irish lady and has been known as “the worst comedy ever made”. However despite the negative criticism, it has had an extraordinarily high viewership across the UK with millions per episode. So, it has been a success financially rather than critically and the idea of adapting the series into a film was rather mixed. Following in similar footsteps to The Inbetweeners Movie in 2011 after that franchise’s success, the film would gain a wider audience outside of its original broadcasting source but would also risk overkill and simply come across as a money-grubbing project. As a fan of the show, expectations of the film were mixed and that is exactly what it became. It still featured the same style of comedy from the series but felt too forced, lacked momentum in traditional situation comedy and the plot was weak. Therefore, Mrs Brown’s Boys D’Movie was rather unnecessary in general but neither was it entirely as awful as expected.


Even as a situation-comedy, the television series of Mrs Brown’s Boys was never anything to take seriously. In fact, its financial success is fighting back against the critics. Production on the feature film was never going to be a spectacle but even at a 3.6 million budget, it did decently. The series was filmed and set entirely in a live-audience studio and the film perhaps added a little more freedom and in terms of tone and filming, it was a delight to watch. Furthermore the fact that it utilises drama and truthful moralities about family and friends adds a sense of sophistication in light of the immature, forced humour. Still, it is in the plot that was the Achilles heel, particularly the use of disability and racial stereotypes in which it becomes a parody of society. It is totally unrealistic and is simply a more forced and cornier episode that has been extended.


Some of the most notable comedies in Hollywood have featured men dressing as women, such as Some Like It Hot, Tootsie and Mrs Doubtfire. In its own way, Mrs Brown’s Boys D’Movie parodies the idea whilst at the same time, attempts to be a serious within itself and the plot. A ridiculous story and a ridiculous character simply connect. As well as being the creator and screenwriter of the series, Brendan O’Carroll stars in the role of Agnes Brown who is practically a parody of everything she claims to be. As a mother of six, her bad-mouth attitude often gets her into trouble and often does irresponsible things for a parent and among everyone she is like a matriarch dictator when she doesn’t really need to be. O’Carroll performs well for such a ridiculous character but still, I wouldn’t be surprised if he, and the film in general, earns Razzie nominations next year. The majority of his ensemble cast are hardly well-known nor are some of them even professional actors. In fact, many are O’Carroll’s own family members which include his real-life sister, wife, son, daughter and grandson. They all bond well with O’Carroll and Mrs Brown on-screen but the problem is that because Mrs Brown is such a daft character, generally, the supporting characters aren’t given the time of day either. However, although Mrs Brown is pretty absurd, there is something enjoyable about her in the series but in the film, it wasn’t really the same. It must be the “so stupid its fun” feeling has drawn the show and potentially the film’s financial success.


Judging from Mrs Brown’s Boys D’Movie’s release in general, it is becoming clear that it is suffering from repetition with the same elements, particularly humour and characters, being displayed over and over again without moving forward. Depending on their own expectations, fans of the original series either will like it or they won’t but those who don’t will most likely despise the film. From this reviewer’s perspective, Mrs Brown’s Boys D’Movie was awful in terms of plot, characters and humour but was filmed with a touch of enlightenment. It should simply stick to being a television series because everything that was flawed about it seemed to be too disproportionate for even an independent film.