It really is 'the Goodfellas of 2010s' but BETTER! 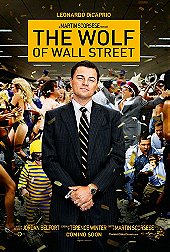 To an extent, The Wolf Of Wall Street is like an experiment on part of director Martin Scorsese. Throughout his career, he has been known for some of the most notorious gangster and crime films in Hollywood and his past two projects Shutter Island and Hugo had been out of left field from his past auteurist techniques. The Wolf Of Wall Street marks the return of Scorsese and cast members embarking into a gangster-like underworld with prospects of criminals, money and drugs whilst simultaneously attempting to live a life outside of it. In that sense, The Wolf Of Wall Street is a bit like Goodfellas all over again but in a more contemporary visual style. It tells the true story of Jordan Belfort, a stock broker who rises through corruption, money, drugs and sex which consequently leads to his fall. Just by that short synopsis, it is certainly a story that Scorsese would be able to pull off seeing as it’s identical to Goodfellas. The Wolf Of Wall Street is another superb Scorsese triumph and proves that he can still at over 70 years old re-create his trademark style of the crime genre.


In terms of The Wolf Of Wall Street’s contents, it is filled with interesting concepts of filming techniques whilst also illustrating moments of shock and dark humour. In some ways, Scorsese has made this like a documentary with DiCaprio as Jordan being both a talking-head and utilising voice-over narration telling his story. These strategies worked because it is told from the perspective of specific individuals and Jordan is the central figure to the story. Furthermore, we have witnessed a range of films featuring shocking sex scenes and excessive use of strong language but not in a long time has there been one featuring more than in The Wolf Of Wall Street. This brings us to what the film provides on an emotional level as there are moments of pure hilarity. Black comedies featuring crime only intends to be funny with a certain sense of humour and jokes aren’t directly told in the plot like in traditional comedies. To an extent, this coincides with humour from films by the Coen Brothers and Quentin Tarantino.


The Wolf Of Wall Street sees Leonardo DiCaprio collaborate with Martin Scorsese for the fifth time. Their previous works together have seen a wider ensemble cast with highly developed supporting characters becoming almost like shared leading roles with DiCaprio, but The Wolf Of Wall Street is his film alone. He absolutely shines as Jordan Belfort with a performance that could possibly be his most complete to date. In this role, he presents pure charisma that sealed his place as a Hollywood star back in the mid-1990s. This is particularly due to Jordan’s charms and intelligence among peers and to the audience. On the other hand, his age catches up with the character he is playing as he becomes the leading, independent businessman and crook whilst we progressively follow Jordan down his destructive path from rise to fall, similar to Henry Hill in Goodfellas.


Furthermore, Jonah Hill has been an actor who, judging from his previous Oscar-nominated performance in Moneyball, does have a talent outside of the traditional overweight, geeky and rather idiotic stereotype that he’s usually been portraying. Whilst that character type is featured in The Wolf Of Wall Street, Hill’s performance as Donnie Azoff matches with the film’s dark humour and deserved to get his second Oscar nomination. Newcomer Margot Robbie also made her presence known in Scorsese’s latest in the role of Naomi Lapaglia/Belfort as her performance is nothing short of sexy yet emotional. It wasn’t the career breakthrough as we have seen in the past but we could see that of her in future performance, and her role in The Wolf Of Wall Street has shown she is capable.


Running at 180 minutes, The Wolf Of Wall Street may seem like a very slowly paced and stretchy film which it is slightly within the film's final 15-20 minutes but from the beginning, you are hooked and through narrative time, will be drawn in Jordan’s path of money, drugs and sex to his downfall. It is probably Scorsese’s longest film but has certainly cited itself as a reminder that the legendary director hasn’t gone weary over time with his trademark genre. The Wolf Of Wall Street may shock viewers with his explicit use of sexual activity, innuendos, drug use and language but it goes beyond the extreme by making it funny to which Scorsese impressively pulled off. Scorsese is still a sublime director and whatever feature he brings next will be another with exciting and high expectations.