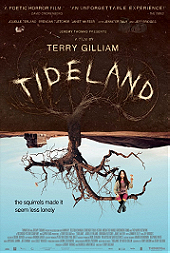 Gilliam's pretentious disclaimer (just let the work speak for itself) at the start of the DVD feature began what would be a very tedious two hours. His intro leads us to believe that this is an intensely personal work that aims to discover his inner-child. Fine. No matter what the medium I respect when an artist is first and foremost working for him/herself. However, in the case of film there are MANY others involved in the creative process, not to mention the audience. (And with film, perhaps the audience should be considered. If I don't appreciate a painting I simply move on to the next thing my museum ticket grants me access to. Walking out of a film entails a little more sacrifice.) It frustrates me when I feel a director is focused entirely too much on entertaining his own interests and entirely too little on satisfying those of the audience. I think that's exactly what Gilliam is guilty of here. It's as though he's so wrapped up in this nightmarish fairytale/resiliance of the child-soul fable, complete with tilted camera effects, overhead shots, layering of animation atop live-action, and myriad other cute tricks, that somewhere along the way he forgot to produce a decent film. The direction and storytelling struggles to blend surrealism and realism effectively, so that the audience is left with charactatures rather than real people, little sense of structural space, and a vague feeling at several points that the film has simply lost it's way. But I guess that's fine, because it certainly doesn't seem to be in any hurry to get anywhere.