More wooden than the Mayflower 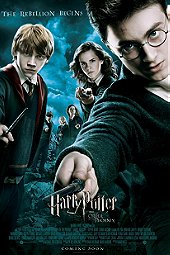 I think there is a tendency to over-rate the Harry Potter films, as most of us have fallen in love with the story. The previous films had a rushed feel about them, but none more so than this. A great deal of the original plot has been completely rewritten and the whole film was so rushed I felt like I was being shunted down a underground escalator. The casting however is superb, Imelda Staunton and Natalia Tena particularly were perfect new additions. The crux of the story is however maintained and still encaptivating. However even this is undermined by the odd piece of wooden child acting that shakes me to the core. Adapting novels(especially lengthy ones)to film will always be filled with such pitfuls, and all considered it has been adapted here as best as it can. If nothing else the special effects will amaze you.