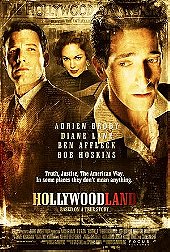 I've always had a soft spot for Hollywood in the 50s and the 50s-era LAPD in articular, so this movie satisfies two things for me.
The movie itself was never the big hit (or financial windfall) that was promised. I think it was because the pre-production press featured Ben Affleck's role as George Reeve, when the bulk of the movie was centered around up-and-comer Adrien Brody's role as a down-at-the-heels PI Louis Simo and his investigation into Reeve's controversial death. SPOILER ALERT - Affleck's role is Reeve's life in flashback and minimal.
The plot, told through Simo's eyes, is surprisingly straight forward: George Reeve, former star of TV's Superman, died after a party under suspicious circumstances. As in the true story upon which the movie is based, many of the leads (and subplots) lead nowhere and in the end, the true cause of Reeve's death was never wholly resolved. The truer victim: truth at the hands of the Hollywood studio system.