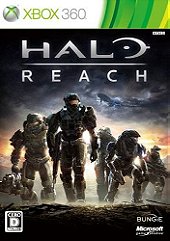 Halo Reach serves as a prequel to the Halo series, and it's the end of the line for planned Halo games from Bungie. I don't remember exactly what material the Marathon games on the old Apple computers covered, as they are ancestors of the Halo series, but for 99.9% of the people playing Halo games, Halo: Reach will be the beginning of the story, an unavoidable tragedy that would see to the events that occur in the numbered Halo series games.

For being a prequel, you will have to realize that Halo Reach goes back in time with some mechanics, such as the life meter. Your shield will replenish, but the underlying life meter won't regenerate, unless you find some healing items. This will bring us back to Halo Combat Evolved days, and it feels comfortable despite being a step backwards in time. Weaponry and armor designs are peeled back a little bit as well, but not to the detriment of the game. It has a classic feel, yet the polish remains from years of updates.

The campaign is possibly the best yet, adding more of a human element to cutscenes and battles, with extra NPCs accompanying you at times, and a better attention to voice acting and direction. Some battle areas are really opened up, which may seem odd at lower difficulties, but you'll appreciate the space in Legendary or solo Heroic. Enemy AI is vastly improved - I hid behind a rock to reload, and the enemy elite engaged in a strafing method of trying to get to the edge of where he could shoot me and then be out of my line of sight. Other times, enemies would turn attention away from me and fire on teammates and then turn back to me, prepared for my return fire after regenerating my shield and reloading. Enemies just seemed smarter, and harder. I don't feel like Halo approaches the tactical appeal of other shooters like Gears or Call of Duty, but you will need proper teamwork at times.

Multiplayer is chock full of modes - you have all of the classic styles that you would want, it's easy to hop in and out of various gameplay modes, and Firefight is back. Firefight is essentially the World at War zombie mode or the Gears of War horde mode. You saw it in ODST, and it returns and could probably be a top tier game and million copy seller all on it's own. At this point though, you know what Halo multiplayer is and what it's all about and if you liked previous versions, you will like this one. You also start off many game modes with a choice between starting weapon kits, which is nice if you're not a fan of certain weapons. There are also abilities which are defaulted to the left bumper, typically sprint is what you'll start with, but plenty of times there are moves like Armor Lock or jetpacks, etc.

There are little perks for doing well, as you unlock armor upgrades that you can buy to customize your look, as well avatar achievements, normal XBL achievements, commendations, and daily challenges. Even if you're tired of Halo, there's enough to keep you going for a few weeks. The ranking system feels a bit more old school as well, you just accrue points towards ranks ahead of yourself, as opposed to ranking up and down. The matchmaking system seems to be more in the background than as the leading rank system like it did in Halo 3, if that makes sense. Forge mode is back and amazing with Forge World. This is already heavily polished compared to Halo 3, it's much better, and after I play with it more I will update the review with expanded thoughts. Halo 3's Forge was fun to mess around with, but not great for making actual levels, but that's not how Forge World feels at all. Sure, you can mess around a little bit, but that's not really how the approach to it comes across.

Halo: Reach is the definitive Halo game, it takes the strongest gameplay elements from the original Halo game, and adds the polish and refinement from the rest of the series. If there was one true negative I'd put out there, it's that the maps aren't quite as good as previous Halo games for Slayer/CTF modes.