Review of Dinner for Schmucks 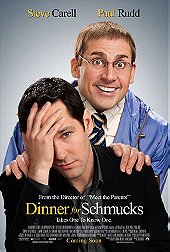 This movie promised alot, but failed to deliver. It was too dark to work on a Hollywood level, but too slapstick to fit in amongst more independent films.

The entire film felt as though it was trying to be something else, and just couldn't get there. Steve Carell plays Barry, a eccentric (if not mentally ill) IRS worker with a penchant for taxidermy. He meets Paul Rudds character Tim. Tim is a ruthless financial advisor, who is willing to humiliate loner Barry in order to impress his boss and co-workers by inviting him to a 'Dinner for Schmucks'. A dinner party in which invitees must bring an idiot guest to make fun of.

The whole thing had a general morality about it, the idiot loser being the 'real' winner, but the point was laboured and dragged and made the film quite un-enjoyable in parts.

Jermaine Clement's role as vainglorious artist Keiran Vollard was one of the saving graces of the movie, he delivered line upon line of outrageous banter with the dryness of the Portugese bush. For fans of 'The Concords' it was pretty much back to basics.

I think the major problem with the movie was the approaches to comedy taken by the various comedians and comic actors. Walliams is renowned for his slapstick/sex joke humour, Rudd for his underplayed frat boy humour and Clement is mostly alternative. I think these types of humour don't gel well together and create a rather unsettling pastiche, which just defines "Dinner for Schmucks".