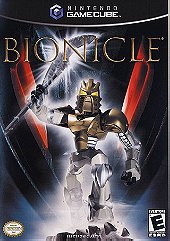 Well I have to say, it was not what I expected. I'm a huge Bionicle fan (doesn't top Sonic though) and a hard-core gamer and I was hoping for a good Bionicle game. I'm not saying it was terrible, but I'm not saying it was good either. The story wasn't too bad. Though they got a few things wrong and left a couple of things out, it made sense and kept things flowing. The characters still pertain their primitive selves and the voices are pretty good.

It's actually a pretty fun game, but very short. Each hero (or Toa, if you know Bionicle) has his/her own unique abilities and missions. And of course, everyone loves to play their favorite characters in a story, so the game gives you a new sense of your hero and actually lets you be your hero. For some people, good graphics are just icing on the cake. As long as it has good gameplay, the graphics don't really matter. But for me the graphics and gameplay must mix so the graphics are o-k.(for the Gamecube at least) The background scenery is very nice and the characters look good too. The sound was ok too. No complaints here. I never got annoyed by them, but I wasn't that impressed either.

Not much replay value though. I mean, you can go back and attempt to collect more lightstones, but besides that you really don't care to play it again. A couple of levels are fun and might have some replay in them. Conversion of the game I think is the most important aspect of the Bionicle game. Did they stay loyal to the fan-base and how well did they pull off taking Bionicle and putting it into my Gamecube? Eh... The characters looked nice and not many parts of the figures were changed. Some animals dramatically changed form, but I can understand why they did that. The village leaders looked a bit weird, but the movie really switched their parts around also. So in this area I think they did alright. But in the story conversion... I don't know what to say here. Were none of these people working on the game even slightly familiar with the story? Don't get me wrong, they were accurate in some ways, but mixing the rahi and bohrok sagas, leaving out the Bahrag queens, putting krana in rahkshi, and giving Lewa yet another pronunciation of his name are just too much.

Usually a game like this would only be liked by those that follow the story, but even us fans didn't care for it too much. I'd say it's a good rent for some, but a buy for others.