Once you play, it's hard to put down 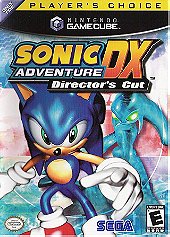 Sonic's back in one of his finest outings to date. The graphics look a lot better than the Dreamcast version, the worlds have more depth and realism. On top of that, the character models have also been improved to match Sonic Adventure 2: Battle's models. Also, the lighting is improved. This makes Sonic Adventure DX a visual treat. Now on to sound. As with every Sonic game, both the major and minor details are beautifully executed, from every bouncy jump to every "bling" sound from whenever you hit a ring. The music in this game is epic and describes the feel of each level well. The music is so good that I'm thinking of buying the soundtrack. And this time around, the music seems louder than the sound effects, which is nice. It's true what they say, the sound is improved. The 50 bonus missions is a big load, and one that I greatly appreciate (more missions means more re-play value). And including a little something for whenever you collect emblems is what Sonic fans want. Visuals, Sound, and Bonuses are the high points of this game, yet control slides slightly under them. Control has been slightly enhanced, but not to the point where Sonic fans have wanted it. As with the Dreamcast version, the visuals don't fall apart even when hammered by extreme speed, and the moves of each character are very responsive. Yet, there is a minor slowdown at high speeds, which is hardly noticeable but could've been easily fixed. Another unfortunate side effect is that this game is very glitchy. Like falling somewhere your not supposed to while your running or jumping, it could result in a constant un-escapable tripping or falling. This is the greatest downfall in the experience next to the, sometimes, god awful camera angles. They control better than in the original using the L and R buttons, but they still screw up in some areas and are hard to fix (like while climbing a cliff as Knuckles). These are bad problems that damage the overall game and shows that Sonic Team rushed many parts. Still, the story and fun of this game almost overrules every problem, and this game is a classic hit to me. This is one of my favorite Sonic games and one of my favorite games, but it could've been better.