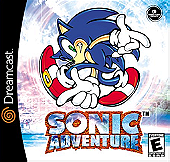 Sonic Adventure was the best launch title on the Dreamcast when the system was released in 1999. It was a return to form for Sega's supersonic hedgehog, who went downhill after the release of Sonic And Knuckles on the Mega Drive.

The gameplay in Sonic Adventure is split into 6 type, Speed, Race, Hunt, Evade, Shoot and Fish. Each of the six character's use one of these types of gameplay, There are 11 action stages and 3 'adventure fields' in the game, the adventure fields are a central hub in which all 11 action stages can be accessed from. The adventure fields are like RPG's you talk to locals and find clue to where the next action stage can accessed from, also all boss battles take place in the adventure fields. The action stages are different depending on character selected, whereas you play the whole Emerald Coast level as Sonic, you only get the first section as E-102, and the middle section as Big. Also the stage varies on the type of gameplay, Sonic's stages are built for speed whereas Tails stages will feature elements to help you get ahead of your rival and Knuckles stages are huge area in which you have to hunt pieces of the Master Emerald. The controls are easy to remember as you have a 1 Jump button and 2 action buttons and you character is controlled by the analog thumb stick. However, there is one element of the game which could bring this down, that is the camera, which occasionally can get stuck behind scenery or would pan far out when you are trying to make a perilous jump, you can reposition the camera to behind your character however as soon as you move the camera jerks back to the original position. Also the collsion detection can go funny sometimes and you plow straight through a wall and fall to your doom, this has only ever happened to me once, but if it happens repeatedly, you could get frustrated.

The graphics have aged since its realease on the format, however the still look good when the game is run in 60Hz. The levels are rich in detail, take the first level Emerald Coast, when you are running along the beach section's you can see Dolphins leap out of the water, during the Killer Whale chase you can see the pier being smashed up behind you. Also the grass is quite detailed and you can tell that Robotnik's base is metal and dirty. The main character models also look pretty good, as does the monster chaos. However, the people in the adventure fields aren't pretty well drawn, like early PSone games, you can see the character's joint's and there is not alot of details with the face's, although the show that the game is Japanese. Most of the games cutsceanes are done using the in game graphics engine, although the FMV opening looks good, and it is from this that the cover of Sonic Adventure DX originates from.

This is a shocker for a platformer, Sonic Adventure acually features a Storyline other than stop Dr. Robotnik getting his hands on the chaos emeralds. Although this does pay a part in the story, the game centres on a Monster called Chaos, who Dr. Robotnik has realesed, to destory the city of Station Square. I won't tell you anymore but Sonic Adventure's features a good story, and is certainly better than Sonic Adventure 2's.

Sonic soundtracks have been over the year's pretty consistant, and Sonic Adventure's is no exception to this rule. The music is perfect, each character has a theme which sum's up their personallity, also the music over the action stages are good as well. Each stage features 2 or 3 tracks, which sound pretty similar. The classic sound effects are here, although the BOING! effect is missing. The voice acting is o.k. but in places can sound dodgy.

Sonic Adventure's main game features at least 15-20 hours of gameplay, but a few mini games based around some elements seen around the action stage's add to this. Plus there are 130 Sonic emblems to collect. But the biggest minigame is the Chao raising game. In this minigame you use small animals collected in the action stages to enhance you chao's abillty and then race them for prizes such as emblems.

Sonic Adventure is a classic Sonic game. It features the right elements to make a perfect Sonic game but adds extra's such as the adventure fields. Though the graphics have aged, this game is one of the best Dreamcast titles ever released.