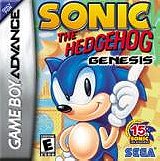 “Sonic the Hedgehog Genesis” is a re-release of the original Sonic game to celebrate the hedgehog's 15th anniversary. Given that the game is already available in recent collection form on the consoles, is there anything special about a re-release of only one game? Unfortunately, not only is this the absolute worst version you can find, it also stands as the worst Sonic game of all-time. Since it's a direct port for the most part, the game looks identical to the Genesis. The first thing you'll notice is how the Score, Time, and Rings counter look scaled down in size, making it look like a Game Gear Sonic game in presentation. Also, since the game is now on the tiny screen, you won't see as much around you as you did in the original. This can pose a problem, especially when you're trying to make vertical movements in some parts of the game. But, the biggest drawback of this rendition of the game is the slowdown. It's especially annoying since it occurs so often for no reason at all. In fact, very rarely will the game ever run at normal speed, which actually makes the game become almost unplayable. Playing through the underwater Labyrinth Zone where going underwater naturally makes Sonic move around slower, combined with the persistent slowdown, is quite possibly the most frustrating experience I ever had to go through in a Sonic game. As with most SNES to GBA ports, the music usually goes through a slight downgrade due to the GBA's inferior audio capabilities. Although this is a port of a Genesis game, it still goes through the same process. The soundtrack comes out weak, and annoying for the most part. Most of the sound effects, such as when Sonic jumps or defeats an enemy, are actually different and are of lower quality than they were before. There's actually the option to turn off the music and sound effects when you start the game, which may already be an indication of problems to occur. So, I already mentioned how frequent the slowdown is, and how it pretty much destroys the game. Does it get any worse? Controlling Sonic on the Genesis was simple. You always felt as if you had complete control despite running at high speeds. And timing your jumps over certain platforms was always a smooth and simple transition. I don't know what went wrong here and how they managed to screw up something so simple, but playing Sonic on the GBA just feels inconsistent. It seems the developers messed around with the physics, making everything feel awkward at times. Sonic will pick up sudden bursts of speed out of nowhere and have difficulties coming to a complete stop all throughout the game. It just destroys the flow of the game and makes it a chore having to play through this way. Although the addition of being able to spin-dash is neat, it doesn't really fit in since it's never really needed as the levels were originally designed without it in mind. If you actually manage to play through the game, you'll unlock the “JukeBox” mode. Basically, it functions as a sound test where you get to listen to all music within the game. You could also play through any of the zones once you've completed the game since the game now has an auto-saving feature. The problem with this though is that you cannot specify which level you want to start from, only the zone itself. These don't really count as extras since it was already available in the original through a certain cheat code. You could also play through either the “Original” or “Anniversary” modes. Difference? You could spin-dash in one while you simply can't in the other. That's it. The GBA will mostly be remembered as a platform consisting of ports from older systems, mostly from the SNES. Some games made faithful transitions, while others came short. Sonic the Hedgehog for the GBA is easily one of the worst I've seen. Along with the fact that it's an incredibly butchered port, there's just no value to the game even at the low price point. Considering that there's already a Sonic collection consisting of all four Sonic games on the consoles at the same price, there's absolutely no real reason at all to get excited over this butchered version of one game.