How Sonic Got His Groove Back 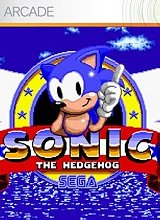 Sonic the Hedgehog has had a rough existence as of late. Sure, he's starred in better games such as Sonic Rush for the DS and Sonic and the Secret Rings for the Wii, but past stinkers like the supposed revival of the franchise in Sonic the Hedgehog for the PS3 and 360 and the odd Shadow the Hedgehog have done the series an injustice. However, Sega has decided to go back to basics by giving Xbox Arcade users a perfect port of the original Sonic the Hedgehog in Sonic the Hedgehog Arcade. Sonic the Hedgehog Arcade differs from the Wii's Virtual Console version of the original Sonic romp by giving players the ability to play Sonic in HD, compete against their friends to see who can obtain the highest score on the leaderboard, and finally a personal favorite for achievement whores everywhere-- achievements. There's nothing like being rewarded for speeding through Act One of the Marble Zone in under 80 seconds to prove you're a good player to your peers. For those who have never touched the original Sonic the Hedgehog-- and by touched I don't mean bestiality-- I pose two questions to you: 1) Do you call yourself a gamer? 2) What are you waiting for? Regardless, Sonic the Hedgehog was Sega's answer to Nintendo's Mario. Of course, message board frequenters continue to debate over which is better to this day. Which makes me understand why I don't wish to frequent message boards anymore. Nonetheless, Sonic the Hedgehog had players going through multiple zones (essentially zones are just different themed areas each with their own set of enemies, obstacles, and challenges), speeding through loop-de-loops, bashing the evil Dr. Robotnik's bad bots, collecting rings-- the life force of Sonic the Hedgehog, and clearing stages. Each zone has three acts. These acts are simply levels. At the end of the first two acts is a goal signpost. Pass the goal marker with fifty or more rings, and you can enter the Special Zone. The Special Zone takes players into a vertigo-inducing area where Sonic-- as well as the whole level-- spins in a ball. The aim of this zone is to locate and pick up the Chaos Emerald. However, if Sonic hits a flashing red GOAL orb, the blue blur gets transported out of the Special Zone and back into normal gameplay. At the end of every third act is a boss battle with the villainous Robotnik-- or Eggman as he's called nowadays. Robotnik will always have a new accessory to his robotic flier allowing him a new means of attacking Sonic. Sonic's first encounter against Robotnik is fairly simple. Robotnik's machine will slowly swing a brown ball and chain from left to right. To beat him, Sonic needs to time his jumps from the two platforms on either side of the battlefield and attack Robotnik's cockpit. After defeating Robotnik in each zone, Sonic will unlock a capsule freeing the zone's animals from captivity, then he will move on to the next of six zones total. As previously mentioned, rings are Sonic's life bar essentially. If Sonic gets hit (which he most likely will), his rings will shoot out of him, bouncing around the vicinity until quickly disappearing. If Sonic becomes smacked while he's without any rings he'll lose a life, and he'll have to begin again either at the start of the current act or at a continue point. Rings aren't scarce thankfully. You can find them as plentiful as Mario's coins. Also, they can be discovered in square capsules. These capsules also hold extra lives, temporary invincibility, and a shield for Sonic allowing Sonic one free hit from an enemy without losing his rings. There's six full zones total to Sonic the Hedgehog ranging from a tropical island to an underwater palace. Each zone has different enemies and obstacles to them resulting in a great range of variety. With six zones each with three acts there's approximately eighteen levels to explore. However, most gamers can breeze through this game in less than an hour. In fact, one of the achievements accompanying this title is to beat the game in less than forty minutes. Yeah... good luck with that. The achievements do give the game some added replay value, competing with your friends on the leaderboard is a nice touch as well. Did I mention yet that this game is only 400 Microsoft points? Overall, Sonic the Hedgehog Arcade is a fantastic XBLA game. This title shows why Sonic the Hedgehog became so popular and rivaled Mario at one time. If you've already purchased the Wii Virtual Console version, then don't bother picking this title up unless you have expendable income. However, those deciding upon this or the VC version should definitely pick up the XBLA game. There's just more bang for one's buck. With added achievements, HD accessibility, and an online leaderboard, Sonic the Hedgehog Arcade is an excellent addition to anyone's Arcade collection.