This game is a pain in th rear to control 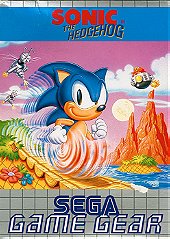 I thought this game would be sweet, because most of the Sonic the Hedgehog games are. I can't say how wrong I was. The graphics are good, the music's average, the sound sounds like Sonic 1 and 2 etc. But the control is like trying to run a mile run with a Semi taped on your back. The control is that bad and worse. All Game Gear games are hard to control, and this game makes no difference what so ever. Sonic has no brakes, too many pits, not enough rings, enemies seem impossible to hit because of the lousy control. I want you to stay away from this game at all costs. Play with a rock instead; it's way better than this trash. This game is also way to short, it shorter than Sonic 1, and that's short. Dodging the bosses, attacks are almost impossible. Now, before I blow my cap off, and start to get really mad, lets go to the ratings.

This game is impossible because of the control. I barely made it past the first stage. This game is only fun with cheat codes and junk.

This game is like any other Sonic game. What else is there to say here?

The sounds from this game were taken from previous Sonic games. I have nothing more to say, other than I am very annoyed by Sonic's jumping sound now.

This game is just like Sonic 1, 2, 3, and all the others. Stop Robonic from taking over the world and turning innocent animals into horrible robots. That's it, and the plot only counts for the instruction manual. That's as far as the plot goes. This is an old plot as far as I am concerned.

The control is horrible. I don't think anyone in the world can control Sonic on this game. You will either end up in a pit or in an enemy, the whole time and I really believe this. Stay away from this game at all costs, if you want to live to be 20.

With the control, I wouldn't even look at this game if I were you. You would never be able to go back to bed if you do. If you have a choice between rent and buy, I say neither. This game is that bad. I wish the police would arrest this game.

Review by KadeX from gamefaqs.com