Sonic with a speed restriction 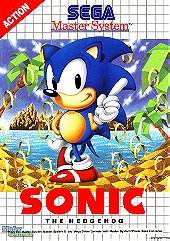 The fact that Sega managed a fully respectable release of the Mega Drive's lynchpin franchise on the Master System that had long since lost to the NES sometimes leaves you to wonder why Sega couldn't have thought of this game sooner. This down-scale undoubtedly gives that fat plumber a run for his coins, but its only the hardware's strong European market (they do have sense) that drove this later release. Inevitably the lack of blast-processing means the removal of the 16-bit versions signature assets, but this title is far from trying to act like its full fat sibling. Leaving aside some superficial similarities, this is mostly a new offering that even proficient Mega Drive Sonic players would be naive to look down upon.

Sonic's beer-bellied, quasi-genius archenemy Dr. Robotnik makes the clich&eacute;d return, pinching magical chaos emeralds and placing them in some mildly secret locations. Of course, that isn't a job finished for the egg-shaped doc, locking up innocent little creatures into silos and manufacturing lots of anti-genius evil machines to torment Sonic on the way. Sonic must beat Robotnik and his and restore peace and goodwill to the island. Not the strongest storyline, but who doesn't want to save the world one more time?

Just in case I haven't stressed this enough, this is not the same game as the 16-bit version. Many features have been compromised to accommodate the lack of juice; the fast speed has been stripped down, moving platforms and the numbers of badniks have been scaled back, whilst features such as loops haven't even made the cut. The levels are a mixture of new zones (Bridge, Jungle and Sky Base) and reworked 16-bit classics (Green hill, Labyrinth and Scrap Brain), downsized to capture only the very essence of them. Green Hill is designed solely for burning through with the odd spike trap, whilst the underwater Labyrinth zone tests Sonic's pea-sized lung capacity and your sanity.

While this 8-bit rendition attempts to pay homage to the original, it still successfully manages to be a different game rather than a mere downsize. The diminution of speed is made up for with the difficulty, as aspects like the hard-hitting badniks and static spike traps make the transposition at the appropriate places. The new Jungle and Bridge zones are ridden with bottomless falls, calling for precise timing. Scrap Brains mazes and flaming obstacles are a reliable pest and Labyrinth zone may force you to an early bath, not just Sonic. It may only take an hour to finish, but this doesn't prevent the absence of taxing parts to plough through.

However, this game doesn't just retain the existing vices; a few new ones are thrown in. Boss battles are significantly harder, as no rings are available plus Robotnik's fetish for firing flame balls may cause death. If you're hit by an enemy, rings can't be retrieved. Chaos emeralds have to be located manually in every zone rather than entering the bonus level, instead you can enjoy a hard levels work in bonus stages filled with trampolines and bumpers to collect extra lives. As long as you previously netted fifty rings. Making the same mistake continuously is very easily done and ultimately game-play has to be taken with caution. The traps and unrecoverable rings suggest this island isn't the kinetic hedgehogs' natural habitat.

The limitations of 8-bit are glaringly obvious in face of the Mega Drive: the originals detailed level backdrops translate to washed out pastiches; and having three enemies onscreen does push the Master System. But this doesn't stop “diet-Sonic” from delivering the core, pick-up and-play Sonic experience, not since his only ability to jump and spin makes for easy conversion to 2-buttons. If your Master System didn't come with this built in (I'd assume you're reading this to appreciate my awesomeness otherwise), this is worth owning. While this isn't a groundbreaking retro classic; it's short and some of the frustrating parts are tiresome, this is undoubtedly ahead of many of its contemporaries. There's enough proof here to silence those condemning this as a 16-bit downgrade, and proves it wasn't just blast-processing that made Sonic. It did help though.

Review by BigCj34 from gamefaqs.com