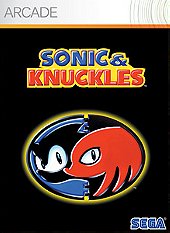 Sonic & Knuckles is finally here! Originally released on October 18, 1994, Sonic & Knuckles should be in every Sonic fan's number one favorite spot. Containing the best music of the 2D games, numerous references and throwbacks to the original trilogy, as well as a 'lock-on' feature that expands the functionality of the original trilogy (which will be discussed later in this review).

GAMEPLAY:
Sonic 2 expanded upon the original Sonic the Hedgehog, giving Sonic much more speed and the Spinball, which has been in almost every iteration of Sonic since. Sonic 3 expanded upon that with new items and gave Tails the ability to fly along with Sonic's ability to expand his attack range for a second. Sonic & Knuckles furthers the updating by including Knuckles as a playable character along with his ability to glide and climb.

Sonic & Knuckles does a great job at making all three of the characters feel unique and just plain right, for a lack of better wording. Sonic's speed, Tails' flying, and Knuckles' climbing fit very well with the game. Just as well, there is a higher level of speed in this game that really makes Sonic out to be the "fastest thing alive". But along with that speed brings the danger that you won't be able to think fast enough to dodge an oncoming enemy or a pitfall. It goes without saying that playing Sonic & Knuckles requires a lot of attention and thinking, but it rewards the player in fun-factor. Every jump, spin, glide, enemy, and stage feels just right.

The game also includes a 'lock-on' function, which is used by having any of the Sonic games from the original trilogy. It gives the past games numerous new things, such as a new minigame for Sonic 1 and the ability to play as Knuckles in Sonic 2 and 3. This coupled with re imaginings of bosses from Sonic 1 and 2 combine to make one of the best platforming experiences available.

STORY:
Taking place directly after Sonic 3, Robotnik's Death Egg begins to fall to earth after being badly damaged by Sonic. Sonic takes a leap of faith off of the Death Egg and lands in a forest. One step ahead of Dr. Robotnik, Sonic sets out to recover the 7 Chaos Emeralds before Robotnik can use them to repair his Death Egg. Thus begins Sonic's quest.

Knuckles, on the other hand, is thought of by Dr. Robotnik to have no more use to him. Robotnik decides to try and have Knuckles killed by sending a Badnik after him. While this fails, Knuckles decides to get revenge on the evil man who tricked him and who has betrayed him. In a nutshell, that is the story for Sonic & Knuckles.

GRAPHICS AND SOUND:
The 2D adventures of Sonic and friends never looked so good! The animations, characters, enemies and stages are all designed well and are diverse. You will find yourself running, flying, digging, and gliding through forests, a volcano, a futuristic base, an ancient palace, and more.

FINAL WORD:
Sonic & Knuckles is one of the best platforming experiences available, coupled with a great soundtrack and great 2D graphics. If you like Sonic, classic games, or just want a few spare Gamerpoints, download this title from the Xbox Live Arcade. Do yourself the favor; you deserve it.

Review by Priss Asagiri from gamefaqs.com