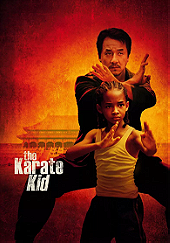 This movie 5.9/10 on the IMDB, which differs from what the others think. And why? Because it's a remake! All you fans of the original Karate Kid judged the remake too hard when you saw the trailer. Just because it's a remake, doesn't mean it's always going to be bad. Not everyone will like it, but I did! It completely destroyed my expectations positively. It is only close to being as good as the original, and two memorable scenes are changed, but there are a lot of things Jerry Weintraub couldn't afford back in 1984, such as a real kid (the original kid was, believe it or not, in his early 20's), a true kung fu master, a trip to China or the chick from Crouching Tiger Hidden Dragon. It doesn't even beat Toy Story 3, but then again, what will?

What surprised me in this film was that a song from the end credits of Hancock is used, when that was another film by Will Smith. The "Poker Face" song by Lady GaGa is also used, so beware Lady GaGa haters. That's the only song I've heard from her, but I obviously thought that it would get worse if they used Kesha. But this movie also used a song by Justin Bieber, but then again, I did enjoy Bolt... This movie also has some subtlety, such as part-English part-Chinese credits due to the fact it's co-produced in China, and when Dre (Jaden Smith) has problems watching his favourite show since it's dubbed in Chinese. This movie also shows us that that's not the only reason why it sucks to movie to China. Those Chinese bullies make the American ones seem bland. Jaden Smith does a good performance in this, and Jackie Chan makes up for The Spy Next Door. He's no Drillbit Taylor, he''s his old self. And he really lives up to the character he's playing - I heard in an interview that his English isn't perfect in real life, either. But that's not the only thing I heard, because you don't want to mess with Jaden - he got a sword for his birthday!

Like I said, the movie doesn't really improve over the original, but it improves on the other films. And thank God it doesn't have monks playing Zen sports in it, because I'd be disappointed if this remake got a whole quadrilogy. It isn't even just a remake, it's a re-imagining. The settings are different, the characters have different names and races. I'll be happy to go racist over Death at a Funeral, because Jackie Chan was depicted as a dead guy in that remake. The karate isn't karate, it's kung fu, but they do make up for it. Besides, The Kung Fu Kid was the working title until they had problems because Jackie Chan had already voiced a monkey.The relationship between the male protagonist and his love interest brings more charm, the landscapes are eye candy and it's even a little less predictable. That doesn't stop Ralph Macchio's film from being better, but not even he minded!

The remake of Hairspray got 91% when that was released only 19 years after the original, even though some of the singing in that film has made me worry, but I loved the remake 3:10 to Yuma! The moral of the film is exactly the same as the other films of its kind, but the moral of this review is that remakes aren't always necessary; it depends how they turn out.

And by the way, why does Dre Parker's name seem familiar?