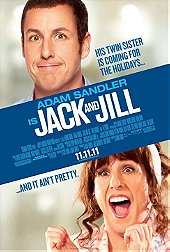 With this movie, it’s official, Adam Sandler has finally hit rock bottom. I mean, most of his movies were rather underwhelming, some of them were pretty bad, but this time, he really nailed it. Indeed, this is a truly awful movie. Dear god, not only the concept was terrible, it wasn’t funny at all and rather pathetic but, the worst of all, he’s managed to drag Al Pacino in this nightmare. I mean, Al Pacino has been doing a pretty good job at ruining his career on his own, he didn’t need that to speed up the process. Furthermore, can you believe that you need to watch this piece of turd to finally see Al Pacino and Johnny Depp sharing the screen together again, 14 years after the great ‘Donnie Brasco’? I know that Adam Sandler has some fans out there but how could they defend this flick? Can they spot any redeeming features because it could be quite enlightening for the rest of us? Somehow, it might have worked a little bit better if an actress would have played the twin sister but Sandler wanted to go all the way with this and the end result was just abysmal. To conclude, it is indeed a really bad movie and you should definitely avoid it.