Aren't Just For The Kids 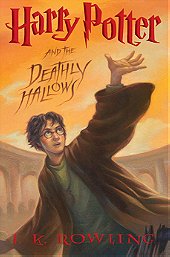 I think this book was done really well. For me it had a tightly woven plot, answered all the questions that arose throughout the series and the change of... lets say scenario (I don't want to give anything away for those who wish to read it, although it seems that everyone else wants to so maybe there isn't a point for me to) stopped it from being stale. The only problem was the ending. The real ending was perfect. A good fight scene followed by a clean cut ending that was very final, but then Rowling had to do the "several years in the future bit" which is alright in some cases when done properly but she didn't do it well. It was pretty much just confirming what was in my mind an obvious conclusion and not explaining about anything else. A waste of paper if you ask me. Can't people use their imaginations and be happy with just speculating what may have happened? Would be more tantalising in my opinion.

Other then that the book was great and I have to confess that I am very impressed and surprised with Rowling's talent.