Every passing minute is another opportunity to cha 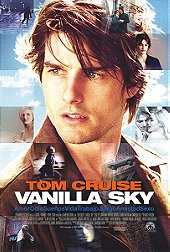 You open your eyes, and a little humidity around forever. The room is dark: the first rays of the sun newly risen recently painted space in the soft golden-pink palette. Exhausted after sleeping hand automatically reaches for the alarm clock to turn off so familiar to you female voice. Quite casually getting up from one of those funny poses, where you always wake up, you stately stretches and mentally want to pick up the remote. Ideas become a reality - television remote control in your hands and getting up, you begin to slowly wade in a bathroom by turning off the remote control on the way coming to the floor doroguschy widescreen TV ...

It's no secret that the Vanilla Sky - a remake of Spanish film "Open Your Eyes" with deservedly moved in here and Penelope Cruz. To say so explicitly, and the forehead is not quite fair to tape Cameron Crowe, for the veteran director added to his creation more than the arrogant excuse of "Made in Hollywood" and the constellation of American actors. Script creator Jerry Maguaera, "" Almost Famous ", but on this day," Elizabethtown "is recognizable very easily thanks to the bright palette of films, always excellent sound, characters, radiating a kind of vital energy that really can be caught in humans.

But David had already got out of bed and continues to trend toward the bathroom ... The audience-pioneers opened the eyes of this picture of Cameron Crowe and they are ignorant, like myself, David, what awaits them further.

That vanilla sky, which draw himself while watching, feeling like a true artist of his inner world and the perceptual system, created mixed strokes. Allusions - faithful companion seen. Many of the issues raised is under a fertile ground for reflection. Each event is issued, ideally, every gesture, glance, word that became part of the story, where the established tenets of its own perception can become a victim of the quantitative confirmation of a theory and the existence of no less meaningful rebuttal. This subtle detail, and with each viewing them becomes only greater.

Who is this David? Rich, owner of a major magazine publisher, whose birthday may well congratulate himself Steven Spielberg (look carefully in order not to miss the pleasant hint), a charming, handsome, but the victim of a situation, insane crazy people around him or selfish, neither as a whose feelings? Dreamer or playboy?

All other David painted for himself personally, not trying to look deeper, whether it's friend or lover Julie Bryan, and only fleetingly in Sofia he caught something that is clean, innocent, virginal, unspoiled money, status, city, and like any child pulled his hand the unknown. But that's the irony - David Ames - a large child, and who knows what will happen when he played enough with it. She is in his view - his own sketch in pencil and is not an angel, and people. Still, it is naive in Sofia Ames saw a ray of hope, hope for true love.

Brian - probably the only one who can call David a friend, but one if he was? He envies the young white Eames envy or let the gossip about him behind his back? There is no denying that this is significant for the main character a man, but whether the rights of David, podpuskaya this person so close?

These lines are almost completely describe Julie and the position in which it is located. 4 times - this is more than just a word.

«What if God was one of us»

By David lives in his own little world and not pay attention to paint real life. He is a great artist, creator, designer of this world, but something has changed, when he met Sofia, everything changed when he sat in that car. Trying to recover the past and head in the clouds, or open his eyes and down to earth? He made his choice.

And yet David, as a hostage of his own mind, makes its journey, the audience looking at a holistic picture of the master Crow. Curiously watching the touching, scary, mysterious story told against the backdrop of autumn ever in New York. Observe, as without the excellent cast under the wing of a wonderful director becomes unforgettable brightest characters; prejudice to the Hollywood actor drop out of themselves, like the fallen leaves of autumn tree. And finally, a magnificent playlist with Paul McCartney's, Radiohead, REM and others caught a photographic memory of every scene, with its own magic, and after such a weightless, as each song sounded, view, arrive at the story itself, perhaps, discover something new, something that may have always hovered near something for my soul.

This movie again and again returns to the seats, and each time whispering sweet charm that was given us life, which must be treasured every passing second, smiling in the sun, barely peeping through the clouds in the very cloudy weather.

Just take a summer sunset on the roof of his house.