Living with a person whom you love, as difficult a 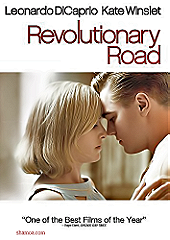 After the first view, coming out of the cinema, I could not find a suitable phrase to somehow sum up what I saw. After watching the movie a second time, the words themselves come out.

"Revolutionary Road" - a real strong drama, not pitying one and boldly baring the realities of life.

Family Wheeler, who brought the viewer is at a certain stage of relations. They have two children, Frank makes his living, April contains a house. They're friends with the family in the neighborhood, a local realtor would drop at times to them at tea. Most ordinary married couple.

Paris. Yes, one day his wife turns to her husband: "Remember how you wanted it that way in Paris? You said that there is another life. After all, to live as you want. " And like everything was clear, he agreed, she buys tickets, neighbors puzzled as non-standard solution of friends. Next dream.

And this is where life is setting its priorities. Out pops up all the things that can not hide and tuck in a black box. As the image on the film revealed disagreements, contradictions, irreconcilability good small, the family man Frank, and the failed actress, but a very strong woman April.

Their marriage was doomed in advance. Too different, they were people, they Wheeler. And the attitude to the family they have bipolar, and the vision of the world. Clearly understand the position of Frank. April's "split" me later. Trying to fulfill the dream of her husband, she clutched at her like a rope of salvation to a better life. This desire to escape. But where and from whom, when everywhere all the same?

Half-open door into their world opens to us the lives of many families, someone will see in the films reflected, someone will just endure a storm of emotions and a flurry of thoughts, torn from the inside. And you can not make this right or wrong aside, here it is - life, without embellishment and pathos. It has been and it will be.

You can blame him, you can blame everything on it. Yes, there is simply no one guilty or innocent parties to the marriage. Coexistence condemns the participation of both parties in the relationship and the responsibility for which the answer both.

John, the same psychopath who twice visited by Wheeler, it just opened pours out the whole truth, in which they are afraid to admit to each other. The trio of actors - DiCaprio, Winslet, Shannon - a rich game that admires and not dare to contradict. Just for the sake of such an alliance is to watch a movie.

And that presented the viewer, mercilessly hits him somewhere inside. After the first viewing, I think, can hardly be really something to pour out. Therefore, "Revolutionary Road" desperately to be reviewed later. But this is a sign of a splendid drama, which knows no time frame. It looks easy, perceived rapidly. Being aware of each time more clearly and distinctly.