I`m not a girl, Not yet a Woman 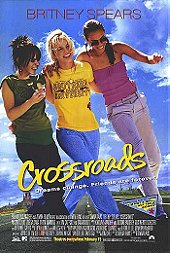 "Crossroads" - one of my favorite movies. And not even because of the fact that it is amazing Britney Spears, whom I love and respect, but simply because it is a very sweet, kind, good and Neskuchne movie. Its nice to see at night, during the day ... at any time of day, and the film will not get you, and you're not going to think: "When will this nonsense?".

Yes, of course, is not a brilliant movie, probably even far from brilliant, but that he is treated as a complete lack of talent, in my view, unfairly.

In some opinions read that "Crossroads" is more like a drawn-out clip. Even if so, is it bad? After all the clips look good, or better yet if they have a lot of sense and they made a good zvukosoprovozhdenie, as in this picture! So everything is fine on the criteria of the video, and youth movies too!

History, as shown in the movie, of course, commonplace, such a picture shot too many, but they never get tired of watching, especially if the movie played pretty good actors, or just great people-celebrities.

Personally the game I really liked Britney, and that she recognized the worst actor on the "Razzie" appreciably only real movie critics and the audience is interested in the least, and the average person is very pleased by the game all the actors, and most importantly, because that people should not worry about something important during such nice films melodramas, he should enjoy watching!

Simple, but it is always popular and never aging a story about a pretty girl, who dreams of becoming a singer and fell into a handsome, do not spoil, but all the pluses: the star-Britney Spears, nice soundtrack, beautiful picture, famous actors (Justin Long, Kim Cattrall , Zooey Saldana, Dan Aykroyd), a replica boring, funny phrase, the spirit of youth is very beautiful movie!

After this film was very fond of the song «I» mot a girl, Not yet a Woman »- a touching and beautiful ballad. Just because she can see the movie, and when at the end of Brit performs «Overprotected» - super!

The film about love and friendship, and sbyche dream and just about life is done so naturally that the audience delighted history, so they would not be bored, so they lured movie and they wanted to keep getting farther and farther behind developing events! The film teaches only good and that you should never give up and that love (as always) save the world!