It will break your heart 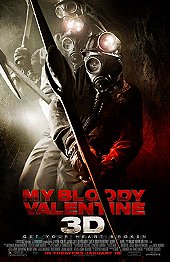 "Slasher" - sub-genre of horror films, which takes its beginning, from Alfred Hitchcock, from the movie "Psycho". The essence of the Source engine as follows: the main character, usually in a mask, kills a photogenic teenagers all possible kinds of bladed weapons, kills beautifully and with particular brutality. In the genre have been and are films such as "Friday 13", "The Texas Chainsaw Massacre, A Nightmare on Elm Street". Films on this theme could clone hundreds, even thousands, for some it turns out well, some not. "My Bloody Valentine", refers more to the first!

What actually constitutes a "Valentine" ... Actually nothing special!

The plot is simple and banal, in front of us - a love triangle. Volume, Sarah Palmer.

The history goes back a long time ago. Ten years ago when all the main characters are teenagers, and doing things which are peculiar to their age, ie, drinking beer, and looking for adventure! In one fine night, the whole group gathers in the mines and solves for them to wander, but they meet at the entrance to a miner who begins to violently kill them. Tom remained with him ...

Then the plot throws at us next ten years, the ghosts of the past behind him, Alex is living with Sarah, they had a son, a big house, life seems to be a success, but suddenly the city comes to Tom, to sell that ill-starred mine, which belongs to him by inheritance, in start getting killed ...

Plot is nothing special of themselves does not represent, does not give ground for reflection, not a particularly shocking denouement, in general - the typical stamp! We are slowly and slowly lead from start to finish, lead, leaving it in the way of mountains of corpses and bloodshed.

What to say about the plot: it is not bad, the plot is, which is not peculiar slasher, pripletenie mysticism and psychology, this is in any gate not climbing.

What to say about the visual component: it is very pretty. One of the properties of the genre, it's panoramic views in this regard, all went close, but the beginning we were shown a pair of safety cameras across the city, but all this is done on an amateur level, Patrick Lussat is not a director, master, and did not remove anything from this item that can stay in memory, so do not wait for the movie studio pictures, exciting species, beautiful scenery, to remakes Marcus Nispel, still crawling and crawling ...

The main and fundamental element slasher - this is of course killing, more killing will be bloodier and more beautiful, the more they will like the public. In "Valentine," murder certainly there. They are few, but they were performed on faint little Quartet, with views over the massacre victims is always wrong, the operator somewhere in the party affected and the film's budget, because of which we can not see dismemberment completely. But basically, everything on the level.

Actors: here a different story ... Well done, other words are not there! Committed, teens to their very young age played their roles perfectly. What can we say about them as Jensen Eccles and Kerr Smith, who has a not small cinematic experience.

For serious disadvantage is, heroes, supermen, who as always run at breakneck speed, only to find out the truth without fearing for their lives.

Just irritating cliches, like "Shut in an abandoned house, where for 10 years no one lives, he stands right in the middle of the forest, in the very middle of nowhere."

As a result, we have quite a watch slasher, one or two times, not more. It also can skip past the eye, as the creators stick basic elements of the genre and not a derailment, mainstream slasher, so to speak ...

While at the moment, in his case, remain Nispel, Dansten. These people have potential, and it is their Source engine still remains an icon of the modern genre.

Plot - 6 (plot is nothing new we have not suggested that the old tale in a new way, in general - the standard rails story, and when the outcome began to take on mysticism, this is no good, we're still looking slasher!)

Atmosphere - 7 (Done very well, but before the masters of the genre does not hold, not creating an atmosphere of escalating suspense, moments when to be afraid, for some reason it seems ridiculous, or vice versa.)

Actors - 10 (Come here, without comment, the work on themselves, and feel the desire to create!)

Editing and Cinematography - 9 (All right, what about a bullet through the body in the slo-mo, assembling a good, nothing is clipped, all assembled for the audience, simply and tastefully.)

"My Bloody Valentine" gets away from me, receives well-deserved, its hard ...