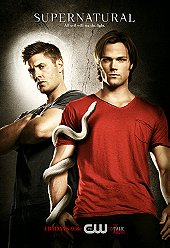 My acquaintance with TV series Supernatural was not so long ago. When I started looking I thought - at one time. But after the first half of the first season, I saw this series for many centuries. The idea of someone may seem an old, well, mysticism, demons and all that. In fact, it is not. It's the story about the relationship of two brothers who try to get along with each other and of course family problems. On most series

His younger brother, tired that it laid the work that repugnant to him. His elder brother, who loves to work. However, one way or another, they both have to implement it because their father disappeared. That's the idea of the first season. Brothers out on the tiles on the U.S. in search of his father, and destroy a lot of scum. In general, two seasons already have

Continuation of the first of the season, and the pursuit of the brothers. What happened to them, it's terrible. But they tend to focus on the work that they have not seized the mountain. Aware that the world can change for the worse and the fact that Sam could be the beginning of something terrible. The series moves to a new level. Terrifying secrets are revealed. Catch a lot of things on their shoulders. Seasons in the petition was successful, with a good last series and hint at the continuation.

Continued. A year after the events of the second season should happen something terrible. To prevent this, Sam, Sam in particular has much to learn that this did not happen. Despite the fact that the series of 16 episodes, the season is not devoid of meaning. We can say the most juice series. But believe me, continue to be "juicy".

It starts with the best. Sam, erring younger brother who does not envy. It has survived not being who does not want. Dean - been there, where the enemy will send hard. But on their heads dumped, whether good, or bad events. And what happens if the reunited brothers will do nothing, can destroy the entire world and to make the most terrible evil of hell free. But this is not the worst. The worst - a feud between the brothers. One would hope that would never end, the other will be used. But more will be worse.

I also want to note that the season is dedicated to director Kim Mennersu, who died during the filming of a fourth season.

The most stressful, very dramatic and just a new season of the show. The brothers reunited. But this is not the end of the end of their tense relationship. They will tolerate and quarrels. But now, it's not about that. That fell on each of them, the worst thing that happened before this. Selecting complex, is particularly complex one of the brothers. Drama, Mystery, humor, loss - all this is in the series but more especially in this season. Though this season has not yet reached the end, I boldly draw the conclusion - the season was a success.

About the series shortly.

At first, it may appear that the series about such serials, fighters from the Devil's evil. Yes series about wrestlers from evil spirits, but he touched a deep relationship of brothers. Mystery - a key part series, but, as I said, the drama - as an important element in the series.

I said very little about TV series, because without disclosing the plot is not completely avoided. Verdict.

, I admit that the road traversed by the brothers really so far away.