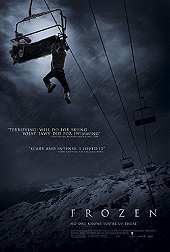 Frankly, when I saw the movie poster, I thought, "What is it? Another trash in a spirit of open water? "But since there was absolutely nothing, I reluctantly downloaded and just reluctantly started this film with one thought - postebatsya over tupiznoy, which packed such films a little more than a full ... well, can still arrange a hysterical sopleizliyanie in ZhZhshechke, in the spirit of that for ponaberut to declare all mediocrities, movie shoot, there raaanshe ... and the sky was bluer and the grass greener and thicker beer ... and as they say "rushed".

But suddenly, toward the middle of the movie, I began to understand and be horrified at the same time, because nothing steeper, I have not seen since the "Dark Knight".

On the one hand we have: simple, I'd even say primitive, and celled story about anything, well, got three teenagers in a situation of force majeure, well, understandably try to get between the case skarmlivaya spectator pieces of information about yourself. Well, acting is very poor quality, do not really know how to play, emotions in the frame minimum, (of course not Bella from the twilight with its stone-faced, but still). There are many shortcomings, such as, for some reason, at such a cold girl did not buttoned up the hood, why the snow was at first hard as asphalt, and then, after a 2-day blizzard, you can walk on it just sinking to the ankles, which ultimately at the tourist camp makes a pack of wolves crazy cannibals? " And thousands of small nuances in which one wants to poke his finger.

But despite this, the film has a profound atmosphere, terrific suspense level Karpatnera or Hitchcock (yes I will fly to the tomatoes from the fans above) in certain points and the story even though trite, but its development is incredibly interesting to follow. It's also nice that the writer is friends with the logic, after watching the film is a complete impression, justified action of the characters, events are moving uniformly interesting and understandable. All logical and shelves.

Total. The film is good, I would even say excellent, because all the disadvantages of completely overlap virtues recommended for viewing to anyone who likes suspense, all of whom do not care about genre and all who care about genre, and just want to watch a good movie.