The collision of two worlds, it looks not so in fa 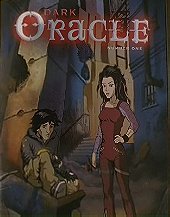 It's the story about the life of a brother and sister (Lance and Kelly Stone), who met with the other world in the face of a comic book "Black oracle. Moreover, these comics just can not be called soulless pictures. Their characters, too, live and trying to seep into the real world. As a result of these movements changed the reality and people behave quite differently, not as usual. It is with such troubles and had to fight the family Stone. A hint of change gives himself a comic, which originally blank pages are painted in a picture of the future and what is happening.

In fact, the idea really turned out pretty good. Settling, pants still designed for children to read (especially since it first appeared on FoxKids), but the people a little older, too, can enjoy.

It liked the idea of themselves mystical comic book, the more that the series shows a picture of them - in fact it is an integral part of history. The plot also pleased. Gradually, tells where did this very comic, reveals a character. The most emblematic figure of the series is Omen (Christopher Turner), a mysterious guy who has a lot of mysteries. Sami attempts to enter the comic book characters in our world and live in the body of real people (such as episodes of the series is) deserve special attention - this is the most interesting part. In fact, precisely because of this fact, I watched him.

The only downside is that the series, because of its focus on the young audience, turned out not so gloomy and mystical, how could it do if calculated for an adult audience. But even without that he is not deprived of many advantages.