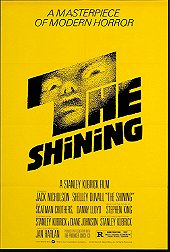 Does this film really need a review? I mean, it's The Shining! Everyone has seen it, right? And if you haven't whats wrong, why aren't you running to the video store to buy it? It's certainly Stephen King's best adaptation, but I think it is not because of King himself (who hated this version, and was determined to re-make a more true-to-book version several years after this one). The real reason it shines is because the genius Kubrick was at the helm.

If you think about it, not much happens in terms of 'horror', but this film is terrifying simply from the atmosphere and well filmed scenes. The intro is one of the best in any film, showing a car driving down a winding road with majestic mountains everywhere, which that tense classic piece playing. It really sets the tone and gives a sense of just how remote this hotel is.

This is by far my favorite Nicholson performance; he played a family man that decends into madness absolutely without a fault.