Was there even a script? 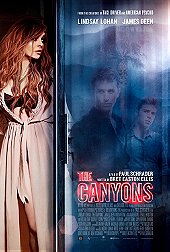 There really isn't much to say about this movie. Despite it being from Bret Easton Ellis, there wasn't much to this film...let alone much that would make it interesting.

I think it settles the question of "Can the novelist write for the screen?"...and the answer is a resounding "No."

Story
First of all, the plot sounds a lot more interesting than how the film actually played out. And the two trailers were a total tease. Evidently you can make anything look intriguing with a trailer. The original, done in a retro campy exploitation style, complete with poor shaky video, over the top music, and sensational onscreen text, was really clever and well done. A nice teaser for the anticipated return of Lindsay Lohan and the next "mind freak" from Ellis as well as writer/director Paul Schrader.

The regular trailer, for the film's release, was also great. Nicely edited, and again, very intriguing.

But the film itself came off as if it thought it was way more sophisticated and edgy than it actually was. Sure it included some unusual cinematic choices, as you might expect from this writer-director pair...odd lighting, unnecessary but fun long takes...that sort of stuff. Even in the opening scene, for the first three or four jump cuts, the character the audience sees on screen is not the one talking. For a minute you think the audio is out of sync.

Execution
But even with artsy filmic tactics, the script and overall story were beyond saving. The dialogue is just dreadful. If I had a dollar for every time an actor repeats the exact same thing they just said, I could probably have covered the film's budget. This redundant effect (which occurred throughout the film), combined with the diction, made almost every scene feel scripted, but without dialogue. As in, you felt like these were people playing pretend because what they were saying came off as forced, and unnatural. It's difficult to tell how much of it was actually in the script and how much of the film was ad-libbed. People just don't talk this way. It was like watching a student film.

The story itself wasn't any better. The plot reads:

"When Christian, an L.A. trust-fund kid with casual ties to Hollywood, learns of a secret affair between his girlfriend Tara and the lead of his film project, Ryan, he spirals out of control, and his cruel mind games escalate into an act of bloody violence."

Sounds like a psychological thriller, with the common love triangle element included. And that is basically what the film is about...but this is one of those rare moments where the plot is more like a real estate ad than a story summary. More often than not, it's a bit difficult to distill an entire feature film into a sentence or two. What you get is usually a decent synopsis capturing the core of the narrative, but leaving all detail, and even a significant sub-plot or two completely out...so that when you see the film, it's a fuller meal than what you read on the menu.

But in the case of The Canyons, there's so little to work with, the plot summary actually needs to be embellished like a newspaper blurb about the fixer-upper for sale on the edge of town. Notice the emotive and sensational word choices: "spirals out of control", "cruel mind games escalate into an act of bloody violence". This all sounds like a normal movie...an establishment of normalcy, then a catalyst, then escalation, and a climax. The problem is, The Canyons doesn't include any of that. It's all just one long plateau. There is no escalation, there is no climax. The characters are all exactly the same throughout the film, and the audience is never given a reason to care about any of them.

Casting
Of course most of the anticipation for the film came from Lindsay Lohan's return to the silver screen after her stint in rehab following numerous arrests. She was "okay" as Tera, the protagonist. (Although a protagonist case could also be made for Ryan.) She still carries a bit of acting talent, and for the most part was believable. Again the script carries most of the blame. However, it's not as if she and the role were made for each other, and it could have easily been done better by just about any other Hollywood actress in the demographic. I could see a Christina Ricci or Evan Rachel Wood filling the role quite well.

Nolan Gerard Funk was perfectly fine as the young struggling actor Ryan. This was a decent choice, and probably the best part of the film.

Conclusions
Overall, the picture was mostly a "good try". It seemed like the film was just trying so hard to be something that it never quite reached. I think Ellis hit the nail on the head: "The film is so languorous. It's an hour 30, and it seems like it's three hours long. I saw this as a pranky noirish thriller, but Schrader turned it into, well, a Schrader film."

While I've never heard of such a thing, I'd be interested to see a "writer's cut"...just to see if Ellis could turn it around. But given the dialogue he wrote, it's doubtful. Directing was certainly not this film's entire downfall.

Score
Basically the only things redeeming about the picture were the halfway decent acting, unusual filmic choices, and the fact that it looked good. This, and the inclusion of Lohan, Deen, and Funk are the only reason you could tell the difference between this film and a total amateur production. I give it between a 4.5