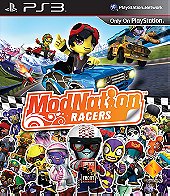 As Kart racers go, Modnation Racers is pretty basic, but with it's own twists. The game only has 4 weapons, but each weapon can be leveled up 3 times and each one has a secondary feature that allows you to plant it behind you as a mine.

There is a standard rocket powerup that can be leveled from a single straight rocket to a swarm of multiple homing rockets; a sonic boom that hits around you to a devestating sonic rift that hits nearly anyone remotely near you; a lightning strike that can hit someone in front of you to a storm that hits everyone on the track; and a boost power up that gives you a nice boost up to a complete warp ahead on the track. Although these power ups can be stacked, they also can be lost if you get hit by someone else's attack, so the risk and reward system is there.

To keep the game from being a relentless stream of attacks that can demolish a player, there is the use of a shield that can be used, given you have enough boost, to protect from any particular attack, giving players a slight reprieve from the onslaught.

The karts themselves can be adjusted to to have a drift vs. handling and speed vs. acceleration, so it's up to the player on how they want their kart to handle.

The game sports some pretty nice tracks included on the disc that are quite inventive by themselves, but it's really the Modnation community that gives this game one of the best track selection of any kart racer, or racer PERIOD. With a community constantly developing their own tracks, there is no end to what can be played on, and this is where the game really shines compared to the competition. Not only the tracks, but the racer and the karts they race on can all be customized to however the player wants, which gives this game replayability beyond scope.

But, there is a catch. In order to get the full potential to create, you have to play through the career mode. And Modnation Racers' career mode is, for a lack of a better word, BRUTAL. The A.I. can get particularly difficult the later you go through the career. Not only this, but to unlock many of the items to use in customizing, you must complete challenges for a race while also finishing the race, typically only counting if you placed 1st. So needless to say, it can be extremely hard to complete first in a race with rubberbanding A.I. that will barrage you with a devastating attack, most likely on the final lap and near the finish line.

Luckily there is a pretty robust online mode that allows ranked and social game lobbies, the social lobbies allowing for everything from the mode of play, A.I. inclusion and difficulty, laps and any available track (and that includes any custom tracks created). Going online even allows for splitscreen matches that allows a buddy to play with you, if only in the social game lobbies. Offline has the same options with up to 4 player splitscreen.

As great as the game is for it's customization, multiplayer and community, the game does have one glaring fault that can really get on your nerves; the load times. The load times for this game is one of the worst loading times I've seen for a game and can get down right ridiculous. Starting the game alone forces you to wait up to 2 minutes to even go into the main lobby of the game, the Modspot. Even in the Modspot, you have to endure ANOTHER loading screen if you want to do anything, and those can go from typical loading time to another ridiculous amount.

In summation, the game is worthwhile, despite some of it's faults (and remember, the loading times are going to be patched, so expect some faster loading times in the future). If you really love kart racers, this game is definitely recommended, but if you are into the whole customization and personalization aspect of gaming, and are a big fan of LittleBigPlanet for that same reason, you will LOVE this game.

Cons:
-Loading times are brutal
-Career mode A.I. can be frustrating later on.
-Full customization options only unlock after completing difficult challenges in the career.