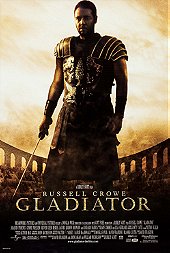 "My name is Maximus Decimus Meridius, commander of the Armies of the North, General of the Felix Legions, loyal servant to the true emperor, Marcus Aurelius. Father to a murdered son, husband to a murdered wife. And I will have my vengeance, in this life or the next."...

When Russell Crowe takes off this helmet and reveals who he is, and says those lines, i get chills down my back everytime.

I love this movie and every scene in it. I don't know how else to say it. lol

From the very start, when we're shown a roman legion assaulting the barbarians in the woods, and the flame-catapult launch one after the other, followed by a barrage of arrows, and finally cavalry charging thru the woods, I knew this film was gonna be a favorite of mine.

So many memorable scenes, powerful lines, and the ending is just so damn beautiful it nearly 'gets' me everytime. And Joaquin Phoenix! Damn, can anyone else possibly play a villian better than he did? he deserved an Oscar for that role!

If you haven't seen it yet, bloody hell, RUN to the video store and rent it, or better yet, just buy it and then watch it.

And if you've rated this anything less than an 8 out of 10, are you sure you've watched the same movie?? I also noticed someone on my 'friends' list gave this a 1 out of 10 (and she gave a Olsen Twin film a 10 out of 10). So sorry, you're getting booted off my list for such an insult (you know who you are).