How long shall I live? 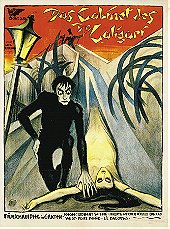 ''I must know everything. I must penetrate the heart of his secret! I must become Caligari!''

A horror film that surpasses all others. Alan relates the story of traveling magician Dr Caligari and Cesare. Their arrival in a town coincides with savage killings.

A 1920 silent film, directed by Robert Wiene from a screenplay by Hans Janowitz and Carl Mayer. Das Cabinet des Dr. Caligari is one of the most influential German Expressionist films, thus often considered one of the greatest psychological horror movies of all time. The film introduces and birthed the twist ending in cinema history. 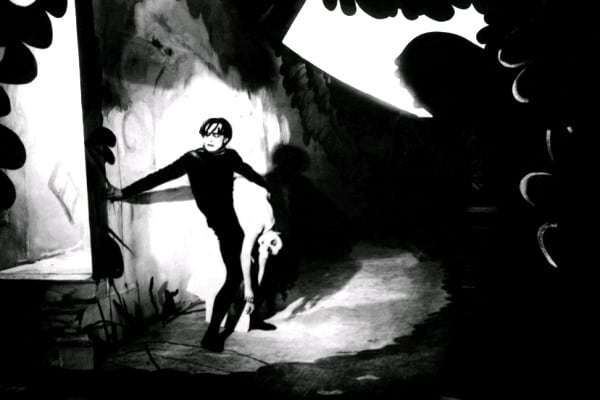 The beauty of Das Cabinet des Dr. Caligari. is the puzzle, the art and the silent medium the piece follows.
When anything is displayed delicately upon each frame it is not without reason. The storytelling transcends art and becomes a combination of genres that border upon thrilling, horror, art and dramatic acting using ones gestures and movements alone.
Narration nicely knits together sequences and draws audiences in, with it's whimsical tide of tremendous marvelling.
Werner Krauss as Dr. Caligari, embodies the part down to the last drop of Methodism acting.
Famed Conrad Veidt, Friedrich Feher, Lil Dagover, Jane Olsen, Hans Heinrich von Twardowski, and Rudolf Lettinger gather together to make an impressive cast which compliments the stylish locations and black and white uniqueness.

''Spirits surround us on every side... they have driven me from hearth and home, from wife and child.''

The Cabinet of Dr Caligari impresses upon every note it plays. Whether it's the accompanying music provided by Alfredo Antonini and Giuseppe Becce, or whether it's the expressionist visuals birthing twisting paths, contorted shapes, eerie darkly formed architecture or the spooky macabre characters, it's fairly obvious The Cabinet of Dr Caligari is a timeless classic equalling mystery and suspense. In fact, it rivals and is mirrored in practically every, in many films and stories which followed the 1920s and even today in modern cinema, so much is borrowed and recycled from this origin of originality.
As for German Expressionism featured, it is meant to use its bizarre forms, dramatic lines and strange angles to give physical shape to the artists' emotions.
The Expressionist style in The Cabinet of Dr Caligari creates a world of madness and disorder. However, its effectiveness doesn’t make it any less strange and trying to watch, especially for those not familiar with the movement. The world is disorienting, at times distracting and impossible for the scientific mind to reconcile. And then comes the framework. Suddenly the irrational, visceral Expressionist world is explained in a rational, logical way, making the film more versatile and accessible to most anyone, regardless of the political, scientific and spiritual movements of the era.

At 71 minutes, Caligari’s story is perhaps considered straightforward, almost mundane by today’s standards. The story opens with our hero, Francis (Friedrich Feher) speaking to a stranger in a garden. As the tale begins, the garden scene fades out, and we enter what appears to be a flashback. As events unfold, we discover that a stranger has come to town, a man by the name of Dr. Caligari (Werner Krauss) and with him Cesare (Conrad Veidt), a somnambulist (for these purposes, a person whom is in a death-like trance). Shortly after their arrival, people around the village begin to die, including Francis’s close friend. As Francis, suspecting Caligari, begins to investigate the strange somnambulist, the danger only grows. When Francis's love interest, Jane (Lil Dagover) is threatened, the film rushes towards a haunting climactic conclusion.

Overall, the plot seems almost enigmatic, as if it has nothing new to offer yet has everything to hide. It seems obvious from early stages in the film that Caligari is controlling Cesare in order to commit these murders. It’s hardly a surprise when Cesare attacks Jane, the only pretty woman on the screen available for damsel-in-distress duty, and the shocking twist ending is so predictable you’re almost surprised they actually follow through with it. However, while Caligari may seem mundane, it’s imperative that we remember this was made in 1919. Every cliché has to start somewhere, and this one? It started right here. This is the real deal, and it would do any film aficionado a favour to concentrate when viewing. Caligari is invaluably educational and untouchable. How can you expect to appreciate modern film if you cannot understand where it came from?
Caligari is indeed one of the parents responsible for paving the way forward for future projects.

It should be noted that this framework, was ground-breaking at the time. It laid the foundation for later films, such as Psycho, in which the reality we see is, in fact, nothing more than a madman’s delirium. The whole psychoanalyst explanation segment at the end, also, was a first, and something that would be used by later films across genres. However, while the implementation complimenting this twist, itself, is responsible for great things in cinema, it was a decision that was both detrimental and beneficial to Caligari’s long-term success.