Review of Eyes of Laura Mars 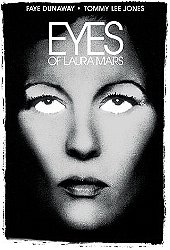 One of my favorites thriller movies was written by...guess who...John Carpenter ! Directed by Irvin "The Empire Strikes Back" Kershner and shooted in New York during the Fall/Winter of 1977. Barbra Streisand and Discomusic soundtrack, 70's high fashion, and a bunch of sexy top models, do you want more from this US Giallo flick ?
OK...no suspension dots...just for 3 minutes...plot is about :
Laura Mars (Faye Dunaway) is a well known and sought after fashion photographer who specializes in portraits of models, one of them is the stunnig Darlanne Fluegel, in erotic transparent clothes and makes extensive use of provocative and violent images for its own work. It is controversial because it can represent their models or fictional violence as victims of the same shows. This violence gives her paintings a special charm, but also attracts a serial killer, whose mercy they will. One night, Laura dreams that her agent (René Auberjonois) is murdered. The dream is bloody reality. It happened more murders, where they are the victims of their models or with their friendly people. Laura witnessed the murders with each time being they can see through the eyes of a serial killer as he commits his crimes. She is obviously connected telepathically with the offender, and haunted by visions of the bloody deeds. The photographer turns to the police, but you will not believe it at first given. Detective John Neville (Tommy Lee Jones) is suspicious of her at first, because some images are similar in Laura's photography book "The Eyes of Mars" (photos by Helmut Newton and Rebecca Blair) the police shooting of murders actually happened astounding. But Neville, who makes an emotional connection with the woman, soon realizes that she is not involved in the crime, but they just witnessed. Together they try to identify the murderer, not least because they have the fear that Laura could itself become a victim. Is suspected, among other Laura's ex-husband (Raul Julia), who is back in New York, and the chauffeur and gofer (Brad Dourif), who was once imprisoned. Finally, John Neville makes a shocking discovery that leads to the surprising end of the thriller soon...
3 mins are gone...so...go and watch it !