In a word, it's AMAZING! 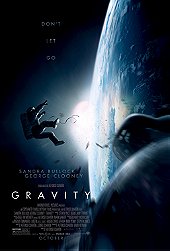 A long-gestating pet project for director and co-writer Alfonso Cuarón, Gravity is one of those rare motion pictures with the potential to appeal to both critics as well as average Joe movie-goers. See, the reviewers will gush over Gravity since it's a well-made feature with tremendous artistic merit, but it's also accomplished enough to play as an action blockbuster for the masses without insulting one's intelligence. Without a doubt, this is a landmark motion picture which will be discussed for years to come - its use of seamless CGI, proficient sound design and gorgeous cinematography is genuinely unprecedented. In fact, Cuarón was compelled to delay the movie until 2013 because he had to wait for cinematic technology to advance far enough to convincingly realise his vision. Large in scale yet intimate and emotional, Gravity is a rollicking space thriller with the power to awe due to its technical wizardry and affecting character drama. In a word, it's amazing.

On her first mission into outer space, Dr. Ryan Stone (Sandra Bullock) is assigned to work on the Hubble Telescope, overseen by confident veteran Matt Kowalski (George Clooney). While Stone is anxious as she struggles to adjust, Kowalski does his best to keep spirits high, regaling both his crew and mission control (voiced by Ed Harris) with goofy stories. But when debris from a Russian satellite enters their path, it accosts the crew, shredding their shuttle and leaving Stone and Kowalski as the sole survivors. Without an easy means to get back to Earth, the pair of astronauts begin moving through the debris field, hoping to reach another orbiting space station to find a pod that can provide safe passage back home. Making matters worse, power and oxygen in their suits is running low...

Gravity is a model of storytelling economy, painting a terse but effectual portrait of Stone and Kowalski before plunging them into mortal peril. Following this, the film for the most part amounts to one thrillingly sustained action set-piece, observing the astronauts defying the odds as they move from one piece of debris to the next. The real eloquence of the screenplay (written by Cuarón and his son) is the way that the characters are further developed through the action. And even though the frenzied pace is interrupted at times, Gravity doesn't contain a single inessential frame, as the more leisurely scenes are necessary for introducing thematic depth which renders this more than just a simplistic exercise in visual moviemaking. Dialogue is another strong suit, as the characters speak in naturalistic bursts of verbiage punctuated with believable technical chatter. It feels like we're listening to real flesh-and-blood astronauts. But despite the astonishing attention to detail, a few aspects about Gravity do not entirely gel. For instance, Stone's hair seems unaffected by the zero gravity; while navigating through space stations, her hair remains perfectly combed. And there's an awkward moment in which Stone is running lethally low on oxygen and needs to reach an airlock, yet seems content to move slowly and without much purpose despite the urgency of the situation. But most bothersome is a deus ex machina of sorts which emerges during the third act. None of this cripples the movie, but it does stand out. 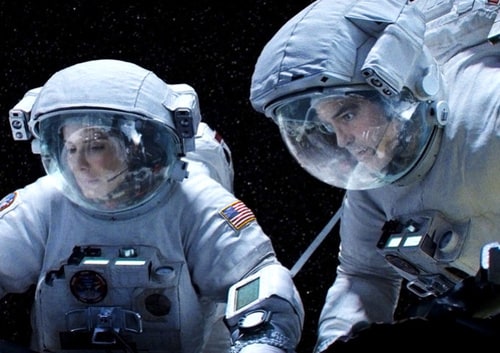 Although sound effects were used in promotional materials, Gravity depicts space as it is: without sound. The notion may seem unappealing, but it works like gangbusters, as the subtle sound design merged with Steven Price's hauntingly ethereal score draws us into the experience, complementing the visuals in an effective fashion without actively drawing attention to itself. While Cuarón is not exactly perceived as an action director, action is actually one of his biggest talents (see Children of Men). Cuarón also has a flair for extended tracking shots, and he pulls off some stunning work here, using a flawless mixture of CGI and live-action elements to execute magnificently detailed shots which run up to several minutes. Gravity actually begins with a bravura 13-minute unbroken take, observing the astronauts at work before chaos ensues. The opening mayhem is wondrous to behold, gripping and terrifying in equal measure. In this day and age, we have become so used to seeing visual effects that we can usually tell what's digital and what's live-action, no matter how competent the filmmaking. But in the case of Gravity? It's impossible. I genuinely do not know how they pulled off this movie. Nothing looks digital. It's an astonishing feat, making this a shoe-in for the 2014 Academy Awards in several categories.

3-D is now perceived as a needless gimmick due to overexposure, but Gravity's extra-dimensional presentation is heroic, giving breathtaking depth to Cuarón's depiction of outer space. It's possible to lose yourself in the dazzling cinematic environs for long periods of time, forgetting that you're in a cinema as feel like you're actually floating in cold, desolate space alongside the astronauts. Gravity was reportedly converted to 3-D in post-production, but it looks as if it was shot natively in the format, as it possesses a gracefulness that even some native 3-D titles can only dream of.

Another aspect of Gravity which elevates it above its less skilful blockbuster brethren is the fact that Cuarón is a superb director of actors. Clooney and Bullock may seem like lazy choices for easy box office dollars, but they really give it everything they have. The big revelation is Bullock, a wild card who's frequently awful in dramatic roles (despite her Oscar, Bullock's performance in The Blind Side was grating). This is career-best work for the actress, who immerses herself into the role with such assured conviction that you forget you're looking at Bullock. For long stretches of time, we watch Bullock by herself, delivering only minimal dialogue. This might sound like a recipe for disaster, but it actually works. Equally remarkable is Clooney, whose performance feels completely natural. He's a superb Kowalski, as his effortless cool and charm makes him both a charismatic presence and a believable pick for the role of a seasoned veteran able to remain calm under pressure.

Gravity may be endowed with a simple, familiar premise, but great things grow from these humble seeds. In the hands of Alfonso Cuarón, this is a white-knuckle rollercoaster of a thriller, beset with memorably rousing set-pieces and enough moments of downtime to develop the protagonists as human beings. Cuarón also underscores that our existence on Earth is a miraculous thing, as well as emphasising how much one life can truly mean. And with a tight 85-minute runtime, the movie doesn't outstay its welcome. There will probably not be anything quite like Gravity for a long time to come.