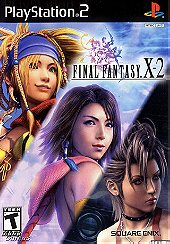 You'll hear a lot about how terrible this game is, but it isn't. If you've been playing Final Fantasy games as long as I have, you will respect this game for daring to be original. It is a game you have mixed odds of liking. You have to understand exactly what you're getting into first: If you expect more of the same from FFX, you will be very disappointed. However, for what it is, without being compared to anything else, it is rather exceptional, and is perhaps the best game in the Final Fantasy series.

The main story path is rather short. You could probably finish it in 10 hours if you pushed a bit. However, the main path accounts for a relatively small portion of the game. There is so much optional content that you will easily get as much out of X-2 as any other game in the series if you try for it all.

The story itself is based mostly around characters and revisiting the world to see how it's changed. The conflict isn't particularly epic and the villain isn't very threatening. The game's tone is extremely happy-go-lucky - that's not to say anything is wrong with that. In fact, I'd go so far as to call it uplifting. The dressphere system is a fairly neat take on the classic job system developed for FFV; since you can switch classes on the fly, there's no need for the game to include more than three characters (don't let people tell you that's a weakness; it isn't). That gives plenty of time to focus on powering up those characters and figuring out ways to use them effectively. Combat itself is fast-paced and more fun than any other game that uses the ATB system. The new combo system allows you to string moves together for massive damage, and even stop an enemy's attack. Learn to use the system and it becomes pretty rewarding, especially against some of the tougher optional bosses.

FFX-2 also has the most replay value of any FF game, due to the fact that it requires multiple playthroughs to see everything thanks to its branching story paths. It is literally impossible to see everything in a single game, and it's very difficult to see the best ending if you just play through it once. The graphics, although not up to par with the most recent installation of the Final Fantasy series, are still fairly impressive and realistic looking. The soundtrack is mostly technopop, which provides a lighthearted feel to the game. The voice acting is impressive, but it can get repetitive and annoying - if you don't have problems with "girl talk", then you should be fine.

All in all, it's a very good package unless you're a whiny teenager who has to see a heavy dose of angst in his games and hates anything with bright colors out of some retarded fear of being associated with anything immature people might see as childish.