A great tribute to silent film that I'm glad I saw 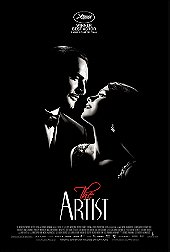 This is the first mainstream silent film to come out in nearly 40 years since “Mel Brook’s Silent Movie”, which is ironic because that movie was about trying to make the first mainstream silent movie in 40 years. I felt that after watching his first endeavors as a director with the “OSS 117” films that it was appropriate to finish off this “Hazanavicius-a-thon” (?) with the first time viewing of his most recognized work to date. This guy has only three real films under his belt and I already think he has become one of my favorite new-coming directors. “The Artist” is definitely my favorite movie that he’s done. It is a very great movie. This movie is actually sort of similar to another movie that I love, “Hugo”, as both are movies that are about movies that you watch and appreciate the cinematic experience. While I personally like “Hugo” more and think it’s a more original film, I still have to say that “The Artist” is just a wonderful movie that I think deserved Best Picture. As previously established with his “OSS 117” films, Michel Hazanavicius knows how to capture the field of an early era of time to the very best of modern abilities. With “OSS 117” he was able to perfectly capture the ‘60s, and with this film he is perfectly able to capture the ‘20s during the early age of cinema. The main focus of this movie was basically recounting a time when silent films were all the rage and a little thing called “talkies” came along and changed the world of cinema as we know it. “The Artist” is about a famous silent movie star who doesn’t accept the new change of “talkies” and his career goes to hell because of it. This is a depressing idea that actually unfortunately happened to a lot of real-life silent movie stars who just couldn’t make the transition. Despite the depressing concept, this is still a very enjoyable movie that acts as a really good tribute to old silent movies. “The Artist” really does take advantage of being a silent movie to tell its story with mostly no dialogue (not even many word cards) through body language and facial expressions. Jean Dujardin does an amazing performance as George Valentin who is not only becoming one of my favorite actors but definitely deserved to win Best Actor that year. Also, one of the best performances from a dog that I’ve seen in a long time that definitely deserved the Palm Dog Award (yes, that’s a real award for dog actors). Overall, “The Artist” is a great movie that I’m glad I finally got the chance to experience.