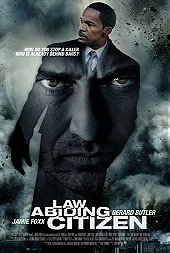 A decent premise let down by miscast actors, poor writing and feels like a terrible episode of Law And Order: Criminal Intent.

The opening where Clyde is tied while his wife is raped, his daughter just stands there like it's an everyday occurrence. He didn't even try to tell her to run, hide or call the cops. It's no surprise that one of the intruders picks her up and kills her off-screen.

Despite have one of the men going to prison, the main character still isn't satisfied. His first attempt is to tamper with the lethal injections for the execution (which feels like Dead Man Walking minus the sympathy and development). If let the guy go on death row, it won't affect a thing.

He then targets other people involved in the trial. The only person who rarely suffers is his lawyer. All Clyde did was sent a DVD recording of the torture scene. What could have been more effective, is putting Nick Rice's family in the same situation as he did.

The law portrayed is so inaccurate, it's like the writer just watched a bunch of TV shows and not bother do any research. The ending is forced, rushed and a complete middle finger for a satisfying conclusion.

If I want to see a film showing the flaws of the legal system I will watch "And Justice for All".