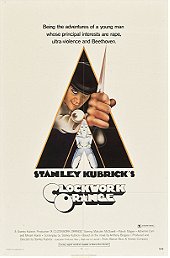 I like this movie. I know this statement will immediately make some people assume that I like it because it is cool to like it, because it makes so many lists of "essential movies".

However, I like it because of what's in the movie in itself. It makes lists and gets a high rating because it's great.

It's deeply disturbing because it has a disturbing theme. A person such as Alex has a behavior which we should not oversee.

The movie is greatly done, with an excellent addition of music. The actors are also amazing. Malcolm McDowell's interpretation is nothing but brilliant.

As for the story itself, we owe this to the book, of course, but I will allow myself to comment on its greatness. Alex might be twisted, but he certainly is not the only one. The entire movie is filled with weirdos and sickos (humans, after all) and I cannot help but detest each one of them. Yet, everything is interlaced so well.