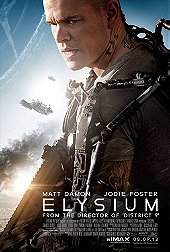 Blomkamp showed promise in District 9 and he shows promise here, but they both falls short when it comes to the political story and the message. Its just too simple, its too cliché and it's almost disgusting. Doesn't help that one of the main villains are incredibly stereotypical (Foster). Foster played like shit and Copley is such a great actor but the script just makes him a too shallow, there is no depth in his character, other than that he is a rapist just because we viewers should hate him.

Damon's acting is flawless and some bi characters are also great. The CGI, effects and details of every scene is amazing, it's just too bad that's the only thing the movie has going for it. Next time Blomkamp, only direct, do not write the film, make an sci-fi horror movie, slasher or some shit, maybe even remake "Event Horizon" you would be perfect for it. Just stop with this ridiculous message bullshit.