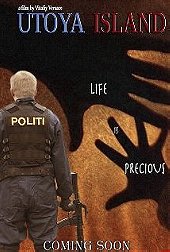 I like to watch things that make people angry. Films that's about taboo's and stuff. I expected this film to be bad, but jesus christ this was beyond bad. The man that made this film obviously didn't do any research beyond only watching some of this on the news.

I don't understand what this film is suppose to be.
Is it a action film? It can't be, because it was incredible boring, and action should at least be entertaining. The chase seen took AGES. Its not fun watching the police walk slowly in the woods for 15 minutes.

Is it a drama? It think is was suppose to be, but I didn't care for any of the characters, and the sad bits where just plain stupid.

Is it a comedy? I did laugh a lot, but that's because the film had laughable acting, laughable cgi, laughable music, and just overall the movie didn't make any sense. The camera was just strange sometimes.

The ending of the movie made no sense whatsoever. They showed the dead people from the island dancing around in a garden. Why the fuck were they dancing? It was so bizarre. And in the middle of the chase/attack, Breivik sat down and ate a banana, what the fuck?

It didn't even feel like a movie, it felt like a bad instruction video you watch in school or first day of a job.

I don't even know.