Review of The Master 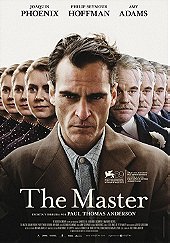 I am glad I didn't fall for the temptation to download the movie and watched it in cinema (fuck you Norway for releasing this movie 6 months after premiere). The movie had some very nice visuals, and the camera is top notch! My eyes had an orgasm every scene.
The acting is nothing short of incredible. Phoenix is ten levels above outstanding, never seen acting like that, that man know how to improv. Hoffman and Amy are great as always.

The film was pumping with energy, I felt angry the whole film, I don't know why, but I wanted to punch something, just like Phoenix did several times in the movie. I felt his frustration in some scenes. And I understand that Hoffman suddenly yelled out of anger.

****SPOILERS MAYBE I THINK ( EVEN THO IT IS HARD TO SPOIL THIS MOVIE)****
As all movies, there was a message. I think I need to think about this a while. Some people need to feel superior and need followers, and some need to be the followers. Quell in this movie was neither, he was an lost soul who tried to hang on to something, but always fell out. He was an sailor of the sea, he didn't belong to anyone, anything or anywhere. Lancaster Dodd admired that and maybe he wanted to be like him? ****END OF SPOILERS****