Forgive me, but... this movie KICKS ASS! 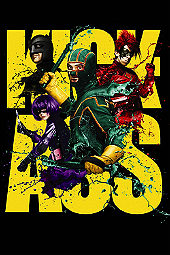 "With no power comes no responsibility..."

Adapted from the comic book of the same name written by Mark Millar, and under the direction of British filmmaker Matthew Vaughn, Kick-Ass quite simply kicks ass. While this particular analogy may seem lazy and obvious, it's appropriate. Relentlessly audacious, hilarious, gloriously violent, gleefully un-PC and electrifyingly entertaining, Kick-Ass is a refreshing, decidedly adult take on the stale comic-book superhero genre that works on practically every level, and is destined for cult classic status. Owing to its modest budget, this is a superhero movie with violence, profanity-laced dialogue and bawdy humour, flying in the face of a genre for which content is normally kept within the boundaries of a commercial-friendly PG-13 rating. In the face of the continually-expanding Marvel and DC cinematic universes, Kick-Ass only grows more relevant with each passing year. 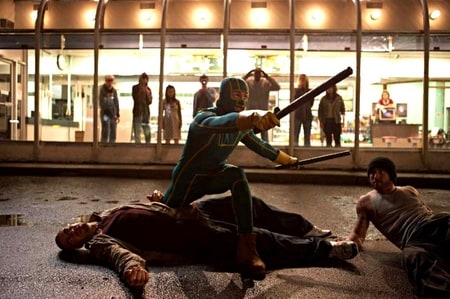 As with most stories of this ilk, the movie concerns an average teenager: Dave Lizewski (Aaron Johnson). However, Kick-Ass doesn't take place within either the Marvel or the DC comics universe. Instead, it takes place in our universe, where Spider-Man and Batman are seen in comic books and motion pictures, and there are no people with superpowers. Fed up with being bullied at school and mugged on the street, Dave decides to become a real-life superhero, despite possessing no special abilities or strengths. To achieve his goal, Dave buys scuba suit and uses it as the costume for his crime-fighting alter ego, Kick-Ass. Soon, a bystander records Kick-Ass attempting to fight off some thugs and posts the clip on YouTube, which rapidly becomes an internet sensation. His raised profile brings him to the attention of two legitimate crime-fighting heroes: the father-daughter team of Big Daddy (Nicolas Cage) and Hit Girl (Chloë Grace Moretz), who are currently waging war against crime boss Frank D'Amico (Mark Strong).

On the one hand, Kick-Ass is a satire of superhero movies like Spider-Man and Iron Man, with the filmmakers gleefully taking the piss out of the established clichés of the genre and subverting the traditional story beats with a painful dose of reality. For instance, Dave's hilariously botched first outing as a superhero ends with him in the hospital bleeding and naked, leading to rumours among his classmates that he's gay, which ironically leads to him becoming closer to the girl of his dreams. However, while the film is essentially a comedy, it still works as a straight action-adventure since the bad guys are sinister and the violence is hard-hitting. Kick-Ass benefits from a sublime script penned by Vaughn and frequent collaborator Jane Goldman. The dialogue crackles with intelligence and wit - whenever Dave hangs out with his two best friends, the one-liners come thick and fast. Dave's interactions with Big Daddy and Hit Girl, meanwhile, are hilarious. The first half is admittedly not as well-paced as the rollicking second half, but it plays better with repeat viewings. 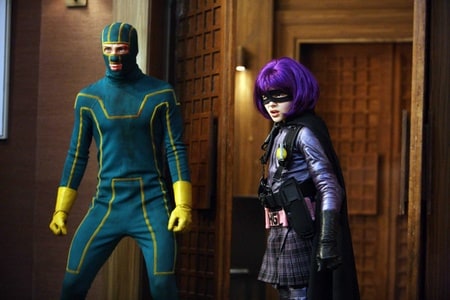 Kick-Ass may be Vaughn's third directorial endeavour, but he steers this material like a veteran, handling wild tonal shifts with impressive control and marshalling a string of incredible action set-pieces as if he was the bastard son of John Woo and Tony Scott. The final act certainly stands as the film's most action-heavy portion, and offers a terrific pay-off for audiences waiting to see the heroes be unleashed. The standout is a strobe-light shootout which nails the video-game aesthetic more perfectly than any other movie to date. It's possibly 2010's best action scene, as it's both emotionally powerful and viscerally exciting. In addition, Kick-Ass is aided immensely by the comics-inspired production design and the slick cinematography that suggests a much higher budget. Yet another great aspect of the film is the use of music. It's clear from the brilliant use of music in Vaughn's prior movies that the director knows how to select tracks for his films. He's a very careful filmmaker, as evidenced by the fact that Kick-Ass has four credited composers in addition to featuring a slew of music from other artists. Ennio Morricone's theme from For a Few Dollars More is even given a workout, while the 28 Days Later theme plays during another gooseflesh-inducing action set-piece. Hit Girl also slaughters a bunch of guys to the theme of the Banana Splits, and Kick-Ass massacres goons with gatling guns to the tune of Hallelujah. It's great stuff.

British television actor Aaron Johnson is ideal as Dave Lizewski - he possesses a likeable quality which serves the character well. However it's the young Moretz who steals the show here. Moretz is already an established actress, but this will no doubt serve as her breakout role. Her performance as Hit Girl is absolutely dead-on - she's cute, hilarious, and awesome. Like all the best screen action heroes, she is able to make the act of firing and reloading guns look effortlessly cool and graceful, and in turn the film's climactic shootout is one of the most exciting and exhilarating instances of over-the-top cinematic gunplay since Shoot 'Em Up. The biggest surprise here is Nic Cage, who's a thorough delight. This is Cage's best screen outing for years as the nerdy, obsessive father to Hit Girl, lovingly aping Adam West in a mock-Batman outfit. Christopher Mintz-Plasse also acquits himself well with the role of Chris/Red Mist, demonstrating spot-on comic timing and an amusing deadpan delivery. Another notable performer is Strong, playing his second consecutive bad guy after Guy Ritchie's Sherlock Holmes. As usual, Strong is a solid villain. 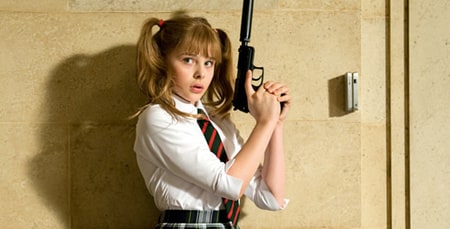 Hollywood studios refused to fund Kick-Ass, compelling Vaughn to go outside the system and make the film himself through his production company Marv Films. Fortunately for Vaughn (and us), he had enough wealthy pals on his side (Brad Pitt is credited as a producer) to gain sufficient funding and bring Kick-Ass to cinema screens. With an indie approach, Vaughn had the freedom to craft an irreverent, boldly R-rated comic-book flick not burdened by the requirement to pander to toy manufacturers or fast food chains. A little 11-year-old girl in a superhero costume may seem cute, but a little 11-year-old girl in a superhero costume who brutally kills people and drops c-bombs? Not so much. All too predictably, controversy has been stirred up over the character of Hit Girl, whose violent and profanity-laced antics have interpreted by some as advocating violence to young viewers. This is, of course, utter nonsense. The film carries an R rating in America and a restricted rating in other major countries, why would young tweens be seeing this movie in the first place? Plus, those who loathe the film because of the content with Hit Girl are missing the point completely. Kick-Ass is just a fun, humorous, cartoonish ride not meant to be taken seriously, so stop being so uptight!

These days, comic book adaptations are no longer fun, with The Dark Knight and its imitators favouring a dour, gritty approach. Kick-Ass returns the fun element to the genre, demonstrating that thematic complexity is possible without making the experience a drag. With director Vaughn delivering one rollicking, raucous set-piece after another, Kick-Ass expertly blends side-splitting tongue-in-cheek humour with bone-shattering action, resulting in an endlessly entertaining and breathtaking slice of entertainment. It's to superhero movies what Shaun of the Dead is to zombie movies.