Right Between the Eyes review
610 Views
9

Review of Right Between the Eyes 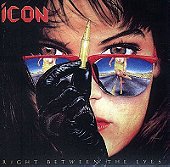 In 1989, "Right Between The Eyes" was released through Johnny Z MegaForce and Atlantic.ICON third record was produced by Dan Wexler with radio personality Ed Trunk and Dan Zelisko. The music video for the song "Taking My Breath Away" was aired on MTV´s Headbangers Ball in Europe and the US. First single had a slow performance, so Atlantic pushed out "Forever Young" as second single... What a pity !
They had stronger tunes as "A Far Cry" and "Double Life", those songs carried the ICON guitar riffs identity. Following the release of "Right Between the Eyes" and the supporting tour with Frehley's Comet, ICON subsequently disbanded.

Alice Cooper - vocals on Two For The Road