A Superbabies beatdown exclusive to Listal 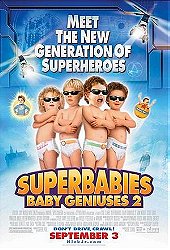 Most critically bashed movies have a weak plot, and so has this. Not just because of the idea but because there are random stupid things going on throughout. The plot is only 25% related to the first Baby Geniuses. At the beginning, you'll see babies trying to do fake baby talk. From this point you'll know it's a Rugrats rip-off. But when this happens...

...you'll want to turn it off straight away. But you just can't control yourself! You can't control the dire urge to sit through the whole thing! You'll have to suffer through Kahuna the non-Hawaiian superbaby using horrid special effects and stunt wire usage to beat up stereotype Nazis! (You know, for kids!) You'll have to suffer through the baby blabber as they "act"! You'll burn your ears listening to Jon Voight's crappy German accent as he tries to hypnotise children with his retarded use of mind control! You'll start hanging yourself until you die from it!

Kahuna has this indoor "playground", which is like "It's a Small World" after a bomb hit it, which gives the four main babies, Archie, Rosita, Finkleman (WOT) and Alex, costumes and superpowers, and they won't shut the hell up! Yeah, real babies won't shut up, but at least they don't speak like drunken 5 year olds! Because they're little kids, they have the most ridiculous costumes in the world. Meanwhile, Kahuna's dark past is revealed after he reasonlessly chats with Whoopi Goldberg and O-Town. He accidentally drank this potion as a baby which gave him his powers and was stuck at his age. So he's an adult who's a baby, I'd stick with real baby adults, like Baby Herman. One of the most horrendous parts is the battle sequence, where the most dated movie CGI imaginable is used and Bill Biscane, the racist German stereotype that would make some fans of the Killer Tomatoes think of Killer Tomatoes Strike Back. Zack, played by Eddie from Lost, gives Biscane pain by stomping NEAR his foot. Two females also have a catfight, but only for a few seconds. Rubbish. And guess what? Bill Biscane loses the game by turning into a friggin' baby! This movie also has one of the worst endings I've ever seen: the hyperactive Archie waving in slow motion to Kahuna as he says "I've got an emergency over at Europe, but I'll be BAAAAAAAAAAAAAAAAAAAAAAAAAA" Makes the last lines of 2012 seem worthy of an Academy Award for Best Screenplay.

While the first movie was released by TriStar, this movie is released by Triumph Films. Damn you, movie! You're just boasting! Every bad movie has bad acting, and the acting in this film is an atrocity. Especially from Jon Voight. Scott Baio is also in this, which destroys my childhood because he was Bugsy Malone. The babies' mouths are horribly CG'd and the voice acting is just wrong. The music is mostly music from the first Baby Geniuses recycled. Forget Transformers 2 and Disaster Movie, this movie offended me the most! Can you believe that this was nominated for 4 Razzies but didn't win any of them? Probably because the movie was such a flop at the box office. And guess what? Despite the horrible reception, this movie has a frickin' fanbase! When I made it popular using my two YouTube account, MaxieTheThird and TheWorstMoviesEver, I was attacked by people saying they loved the movie, it's the greatest thing since saggy breasts and that anyone who doesn't like it should be ashamed of themselves, saying insults like "f**k you this is the best". I didn't laugh, my hand just hit my eyes. What has happened to society? I can understand why they like Disney pop, Twilight and the Air Buddies franchise, but this? Good God! It's like saying that Theodore Rex is great just because it has dinosaurs in it!

I watched this thing on YouTube because paying for it would be stupid, although Channel Five in the UK recently had the balls to broadcast it on public television. There will be people saying "it's not the worst, Red Zone Cuba and Daniel - Der Zauberer are the worst." Every time a thing like that is said, God causes abortion. I'm not kidding. This movie is the perfect explanation of why I never want to get married - it's not cute, it's not so-bad-it's-good/boring/hilarious! It's so-bad-it's-horrible! I don't care if it's a kids movie, it's (almost) the worst movie of any genre! Worse than Batman and Robin! Worse than Ricky 1! Worse than all the rip-offs! Worse than a fangirl's biggest obsessions! Worse than the Troll franchise! Worse than any crappy horror or exploitation flicks, even those shot on video! Worse than anything else on the IMDB's Bottom 100! Worse than Twilight! Worse than the works of Freidberg/Seltzer, Ed Wood or Uwe Boll! Worse than Battlefield Earth! Worse than most of the animated Titanic movies! Worse than Ballistic: Ecks vs. Sever! Worse than anything riffed by MST3K or Cinematic Titanic! Hell, even worse than the late Bob Clark's other works, Baby Geniuses 1 and Karate Dog! If there's anything worse than this film, it has to be In Search of the Titanic, a.k.a. Tentacolino, which you should not look up on YouTube if you're high. But still, DO NOT WATCH THIS MOVIE! It will change your life forever! That is, if you're not retarded.