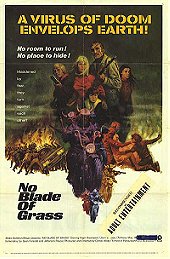 "The death of grass" in US "No blade of grass" is one my favorite novel from the british author Samuel Youd, under the name of John Christopher. Well-know for the "The Tripods" saga, Youd wrote several good novels as "The year of the comet" The world in winter" "The little people".
The 1970's adaptation, directed by magiar native Cornel Wilde (Kornél Lajos Weisz), yes the Academy Award actor, focused on a chinese virus strain has infected rice,wheat and barley crops causing massive famine and leaving world descending into anarchy. In a medieval England, engineer John Cunstance, played by british actor Nigel Davenport (the founding member of the English Stage Company), drove his family and friends in a journey of perils and pains, trying to reach John's brother's potatos farm.