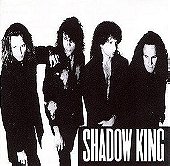 Shadow King (1991 Atlantic Records)
Foreigner has released three records only in 80's era, is not big problem when you sold 50 million albums in that decade...
So what's the story between mr Grammatico and mr Jones ?
Isn't the devil in mr Jones the problem, he's an elegant and modern producer, even replacing Ted Templeman on "Van Hagar" 5150, almost the perfect merging.
The "black swan attitude" of Lou Gramm is the cause, and "Long Hard Lock" is the effect. So he packed all his Foreigner stuff and created a new band with his studio pals from the same record, Bruce Turgon on bass guitar and Vivian Campbell.
Behind drumkit they placed Kevin Valentine, from The Cruisers, so the band can start working on "Shadow King" album : "What Would it Take" comes first, a dramatic number with a great guitar riff. "Anytime, Anywhere" is a 'in your face' shuffle, with an exploding vocal line, sometimes reminds me Priest's "Another Thing Coming", and probably Campbell played his best guitar solo in this album. At number 3, if you are in a recording band you know what I mean, there's another dramathic and anthemic song, Once Upon a Time, Lou Gramm scratchy voice at the climax, and the band is marching like a steamroller. Don't Even Know I'm Alive is a melancholic love song, with some lyricism from Gramm. " Boy" starts with Campbell tapping on the guitar fretboard producing a tubolar bells sounds alike, that's my favourite song, then playing a minimal rock chords under the vocal line and finally exploding in a power bridge that blows your speakers and pump your blood !!! With a great solo and a fine arpeggios as outro "Boy" is an AOR masterpiece.
So don't esitate, go to your fav record store and buy Shadow King, you'll say : Thanx Max ! Later...